Fibre is an important part of our internet diet these days, and BT and Sky are two of the biggest providers in the fibre broadband market. So how do you choose between these two giants?

BT and Sky are two of the best-known broadband providers in the UK. They both use the Openreach network for their cabling and offer a wide range of speeds and packages. However, slight differences emerge when it comes to choice, customer service, technology and the all-important extras. Here’s how the two heavyweights stack up against each other.

Until suprisingly recently, Sky offered just one fibre speed, averaging 59Mbps. However, they've recently introduced their entry-level Superfast 35, averaging 36Mbps and entered the next generation fibre-to-the-premises (FTTP) market with their Ultrafast and Ultrafast Plus packages, averaging 145Mbps and 500Mbps respectively. This all means there's now a much better range of Sky fibre broadband options available.

However, that's still not quite up to BT's standards. Their range starts with Fibre Essential, at 36Mbps, but also offers 50Mbps and 67Mbps average speeds from their Fibre 1 and Fibre 2 packages. From there you move up to their FTTP options, which give you a choice of 150Mbps, 500Mbps and a blisteringly fast 900Mbps – if you're luckly enough to live in an property where FTTP is available (currently over six million homes). So, BT is both faster than Sky and offers slightly more choice.

The download speed is important so you know how well you can stream TV or get your pictures and music. But you may also need to be able to send large files and conduct conference calls (Zoom anyone?), and that is where the upload speed comes in. As you'd expect, upload speeds rise roughly in line with the download speeds, although the figure is always significantly lower. In short, this means Sky's fibre broadband upload speeds range from about 9Mbps up to 60Mbps, with BT's ranging from the same 9Mbps up to a theoretical 110Mbps. Which is really very, very quick.

As always, speed is the name of the game when it comes to making your broadband choice. BT wins here by offering not only a wider selection but a far higher top speed for it's premium Full Fibre 900 FTTP broadband package.

As mentioned above, Sky now offers a wider range of fibre broadband packages than it ever has. There are four basic levels, Superfast 35, Superfast, Ultrafast and Ultrafast Plus. All come with pay-as-you-go calls as standard, no download limits (which is pretty much standard these days) and are all only available on 18-month contracts. 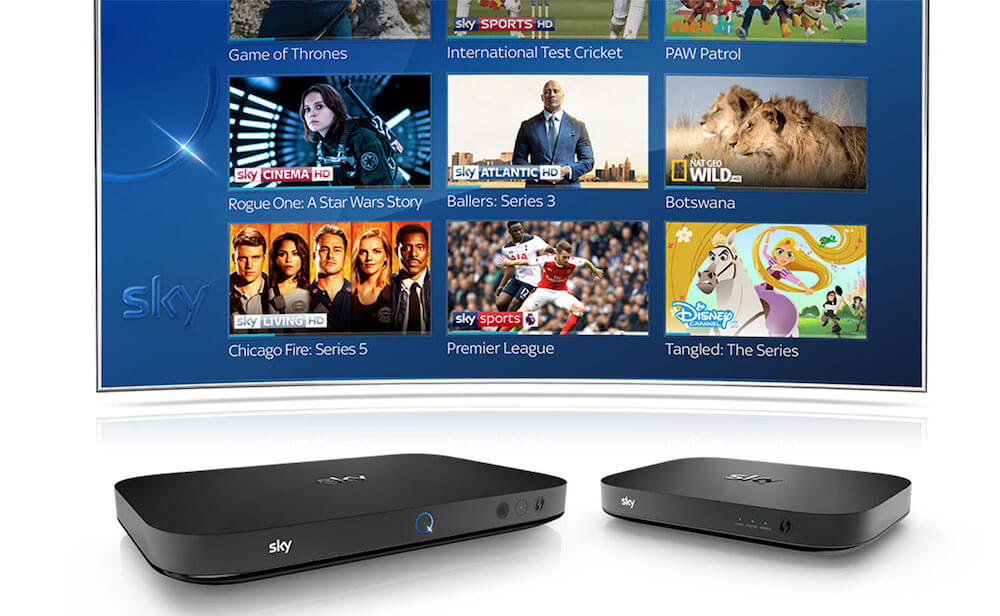 BT has significantly more choice by offering three basic unlimited FTTC fibre options – Fibre Essential with 36Mbps download speeds, Fibre 1 (previously BT Infinity 1) with average speed of 50Mbps and Fibre 2 (Infinity 2) which averages 67Mbps. To this they've added their three Full Fibre FTTP packages – Full Fibre 100, 500 and 900. All BT’s packages come on an 18-month contract, and you can choose whether to have an active landline or not – it's no longer offered by default, and you'll have to pay extra. On top of that, you can of course bolt on anytime calls. Naturally, there are no download limits.

BT does better for choice than Sky, with six speed options rather than four. BT's average top speed comfortably beats Sky to the post, and BT also allows you to opt out of a landline – something becoming increasingly common.

The average percentage of customers with reason to complain across broadband providers was 12%, and Sky’s own figures show it is bang on average at 12% while BT’s was just 10%. When complaints did arise, 62% were happy with how Sky dealt with them (the best overall), but that figure falls to 57% for BT. Sky customers face a 2 minute 28 second wait when attempting to get through to the call centre while BT’s average time on hold was measurably better at just 55 seconds. For the sake of comparison, the average across the sector was 2 minutes 10 seconds.

If you do need to get in touch, Sky operates a seven-days-a-week customer service. Customers can access live chat online between 8.30am and 8pm or call the contact centre between 8am and 8pm. BT’s phone helpline is open Monday to Friday 8am to 9pm and 8am to 8pm at weekends and the live chat service is available seven days a week from 7am to 11pm. Both providers are also contactable via social media on Twitter.

There is very little to choose between the two when it comes to standards of customer service. Sky’s reputation for dealing with customer problems is perhaps a little better than BT’s however, giving it the lead in this area.

Both offer pretty nifty technology. BT fibre customers get a Smart Hub, kitted out with seven antennas that locate the best frequencies for the top speeds and are also set up to cope with faster speeds in the future, so if BT brings out improved packages you won’t need a new router. The hub has an energy-saving mode when not in use and also constantly monitors your internet connection and if it spots a problem, it will quietly reboot and make a fresh connection.

In addition to the Smart Hub, customers can also sign up for BT Hybrid Connect. For an extra monthly fee, BT customers will receive a second mini router, powered by EE broadband, that will automatically kick in if your fibre broadband goes down, ensuring you have a constant connection.

A third piece of tech on offer from BT is the wifi extender, supplied to customers signing up for BT’s Complete Wifi scheme. This increases the reach of your wifi throughout your home, and BT is so convinced it works that it offers a £100 money back guarantee if it doesn’t. 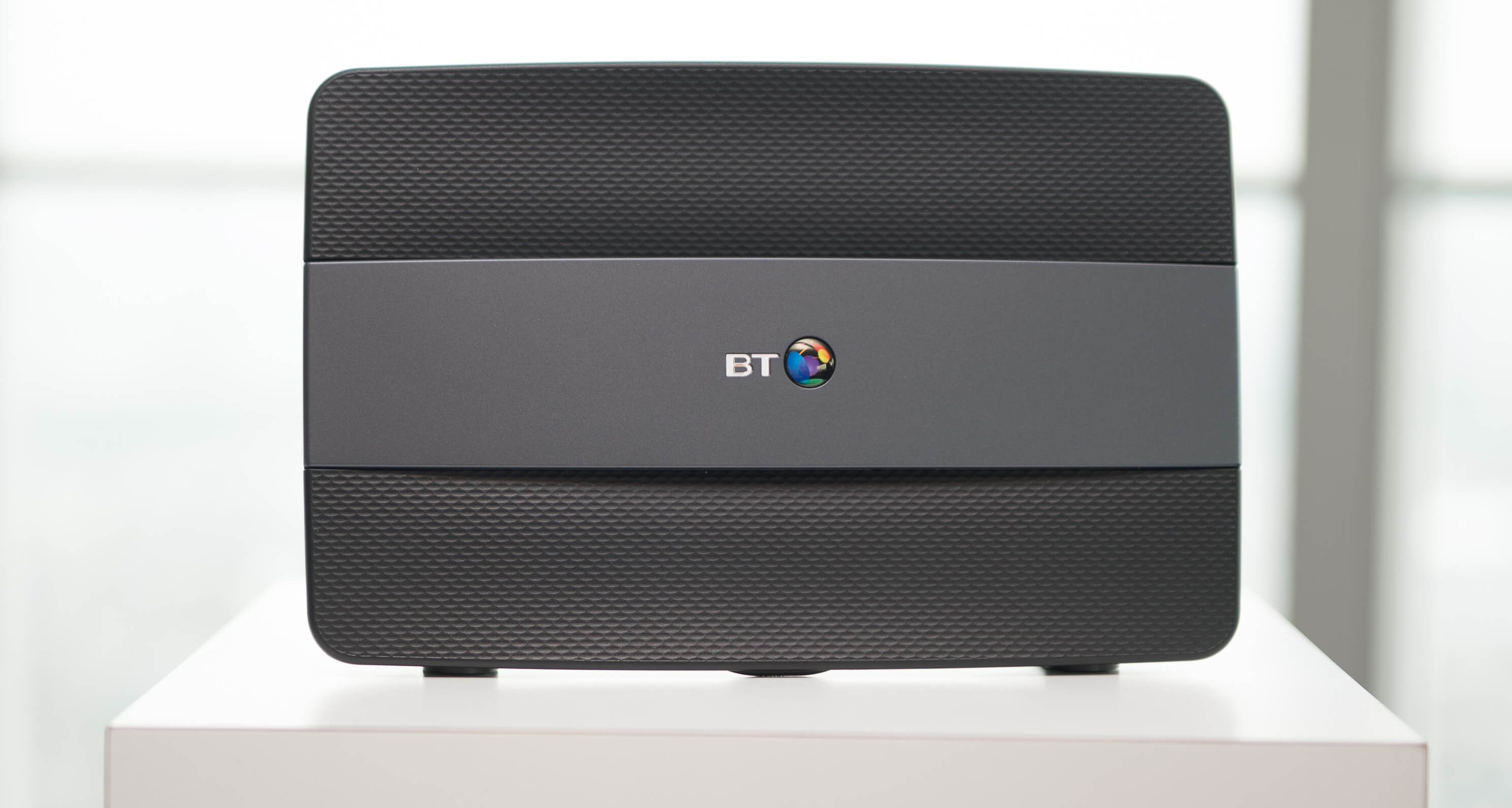 Sky fibre customers get equally good equipment with the Sky Broadband Hub router. It has four gigabit ethernet ports, eight antennas, plus you can connect up to 64 devices. It is designed to save energy and will automatically switch to low power mode when not in use.

Like BT, Sky also offers some additional tech to improve your home wifi. The Sky Broadband Booster works as a wifi extender, increasing the reach of your home wifi. Sky claims that if it doesn’t work, it will refund the cost, providing a reassuring guarantee.

Both are pretty much neck-and-neck on tech. They get green points for energy saving and the ability to connect a multitude of devices, as well as for the optional wifi extending tech. BT just takes this one as it offers its mini 4G router to keep you online even if your fibre connection goes down, albeit at extra cost.

Sky customers receive a McAfee Internet Security Suite trial for 12 months as well as the Sky Broadband Shield that lets you filter websites and customise your privacy settings into age categories. You can also use its helpful watershed feature that lets you set age-rating restrictions depending on the time of day.

Sky customers also get access to the Sky WiFi app while on the move. This gives an added option to the often slow public WiFi available and provides free and unlimited wi-fi in thousands of popular places across the UK such as coffee shops. It can be used on six registered devices.

It is worth keeping an eye on Sky deals as it often has incentives such as cashback or other rewards.

BT offers similar extras such as virus protection with BT Virus Protect (also powered by McAfee) and you can get up to 1000GB of storage in the BT Cloud depending on which fibre package you choose. BT customers also get free access to five million BT WiFi hotspots around the UK.

You get useful WiFi on the move and virus protection with both providers. BT wins this one though as its WiFi hotspots are more widespread and you get cloud storage. Depending on any current offers, you may also get a significant cashback offer – not an 'extra' as such, but certainly extra value.

BT falls behind slightly on customer satisfaction compared with Sky, but then brings itself back into contention with technology and its extras such as public WiFi and BT Sport. Both providers offer top TV deals to add onto their broadband services (although some would argue that's really Sky's trump card), but if you are just looking for a reliable fibre provider, BT does offer a much greater choice and a faster top speed.