Hyperoptic broadband review 2022: Is it any good?

Hyperoptic is an ‘alternative’ broadband providers that have built their own ‘full fibre’ networks in parts of the UK but is it any good?

Results of our broadband survey

We interviewed 6,000 household broadband decision makers in 2021. This is how Hyperoptic broadband customers rated their service:

Our review of Hyperoptic broadband

Hyperoptic is part of a new wave of providers offering gigabit broadband. It does this using its own network and has a strong focus on apartment blocks in big cities. It is ludicrously quick, but also incredibly unlikely you will be able to get it. So is Hyperoptic broadband any good?

Here’s a quick look at what you can expect to find in a Hyperoptic broadband package.

Most of the UK’s broadband is delivered using copper for at least some of its journey from the cabinet to your home. But Hyperoptic uses fibre for the whole of its network, boosting speeds and capacity far beyond what anyone else can offer.

Hyperoptic’s entry-level product provides 50Mbps download speeds, which is ideal for a household with a few devices for streaming, online gaming and general web use. Hyperoptic also offers a 150Mbps service and a 500Mbps service, which provide capacity for more users and 4K streaming, with quite a bit to spare. (Take a look at our guide to work out what broadband speed you might need.)

The real head-turner, though, is the 1Gbps package that comes with an average download speed of 900Mbps. It was the UK’s fastest home broadband service, but with Virgin Media now also offering 1000Mbps broadband with its more widely available Gig1 service, Hyperoptic no longer leads the market in speed.

Hyperoptic also partners with Sky TV via Sky Glass or a Sky Q box and entertainment bundle. These can be dualed with any of Hyperoptics Fast, Superfast or Ultrafast connections.

Be aware that Hyperoptic states that its advertised speeds are dependent on you connecting your devices directly to its Nokia or ZTE Hyperbubs using wired ethernet connections. Depending on your bundle, wifi connections are expected to reach 30Mbps-80Mbps on a single-band router, 200Mb-400Mb on the standard ZTE Hyperhub router, and 200Mb-600Mb on the super premium Nokia Hyperhub router.

Other providers are also now offering ultrafast speeds, including BT, which can now provide up to 900Mbps in some parts of the UK, along with Vodafone and EE.

According to Ofcom’s 2021 data (Ofcom data is more often than not over a year behind the present date) The median average actual download speed of UK residential fixed broadband services is 50Mbps, so this is a huge upgrade. Although 1Gbps (1,000Mbps) is the fastest broadband speed in the UK, Hyperoptic is by no means unique in this regard. Gigaclear is another provider offering gigabit speeds, but in more rural areas, and you’re even less likely to be able to get that. You are far more likely to be able to get Virgin’s 1Gig service.

Hyperoptic’s bundles are available on rolling contracts but if you commit to 12 months there are big savings to be had. Either way, there is an activation fee to pay. Just bear in mind that availability is very limited. You can check if you can get Hyperoptic via its website. If you can’t get it, your best chance at ultrafast broadband is Virgin Media.

With many providers, the upload speed is a poor relation to the download speed. One of the beauties of fibre to the premises (FTTP) – the type of fibre used by Hyperoptic – is that it can offer symmetrical speeds. That means the download and upload rates are the same.

Although the 50Mbps service offers a meagre 5Mbps upload speed, the other packages offer upload speeds that are the same as the download speeds. This is a godsend if you regularly deal with large files such as video or audio. 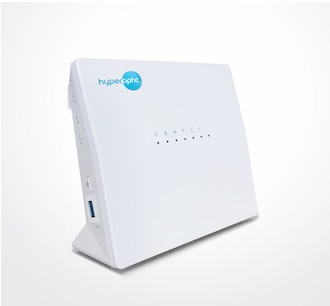 All broadband packages come with a Hyperhub. Depending on the package you choose you will either receive the Nokia Hyperhub or a ZTE Hyperhub. The Nokia Hyperhub is provided with 500Mbps and 1Gbps packages. It is dual-band and four gigabit ports which will support up to 1Gbps speeds over a wired connection. You won’t get the very top speeds if you go wireless.

A ZTE Hyperhub is supplied with the 50Mbps and 150Mbps packages. Slightly less powerful than the Nokia Hyperhub, it is still more than capable of delivering the speeds you pay for.

Hyperoptic invites landlords and residents to express an interest. It also works with councils to bring gigabit broadband to social housing. And it has partnered with more than 100 home developers. Hyperoptic has plans to reach five million within a decade, but you’ll need to be patient.

If you are lucky enough to be covered, then installation is a bit different to most providers. Because Hyperoptic doesn’t use the Openreach network, its engineers will need to install a separate ‘Hyperoptic Socket’ inside your home. Installation generally takes an hour and engineers will install a socket up to 10 metres from the entrance. If you want the socket any further into your home, you’ll have to pay a bit extra.

If you want to connect a whole building, this will take a little longer. Hyperoptic will assess the building to see if it is viable and seek permission from the freeholder or building management company. If all is well, the process will take four to six weeks.

If you do have any problems, then Hyperoptic has a 24-hour customer support team available on 0333 332 1111 that handles anything from router problems to connection issues. Alternatively you can use the Live Chat service, or send an email to support@hyperoptic.com. As with most broadband providers, there are some complaints about delayed or missed engineer visits, but in general the feedback is positive. It seems Hyperoptic’s speed has inspired a degree of customer loyalty.

It’s worth pointing out that you don’t need a phone line to get Hyperoptic. But if you want to pair your broadband service with a home phone, you can. Calls are made over the internet using VoIP technology. This means the quality should be high but if your broadband goes down, you won’t be able to make calls.

The fact that Hyperoptic offers gigabit speeds will be enough for some people, provided they can get it. Especially those who deal with large file uploads, or those simply desperate to get away from BT Openreach. Even better, its bundles are pretty affordable, even when compared to moreconventional fibre rivals.

It’s a shame there are only meagre savings on offer for those who don’t want a home phone. Given the Openreach network is bypassed entirely, the absence of line rental and phone charges would be a huge selling point for a generation that is ‘cutting the cord’.

It’s also worth pointing out that most web users won’t actually need 1Gbps, or even 150Mbps. So is the increased cost worth missing out on bargain TV services and free Wi-Fi from other providers? But the biggest issue is coverage. Hyperoptic might have big plans in the works, but for now it’s very limited when compared to the national scale of BT and Virgin Media.