Plusnet may not be the first name you think of when you think of broadband, but the Yorkshire-bred provider is constantly nipping at the heels of its more recognisable rivals – BT, Virgin and Sky – with decent speeds and a stellar customer service record. And since it was bought by BT several years ago, you can be assured that unlike some other smaller providers, it's here to stay. But is Plusnet broadband actually any good?

Is Plusnet broadband any good?

Plusnet may not have the brand power of Sky or Virgin, but the Yorkshire-born provider punches way above its weight, particularly on its fibre speeds.

You can’t beat decent customer service and if you can couple that with a decent broadband download and upload speed from Plusnet’s fibre deals, then you may well be onto a winning combination. As with all providers on Openreach, if it's raw speed you're looking for, you'll need to consider Virgin Media instead.

Plusnet offers a choice of three speeds. You can get download speeds averaging 10Mbps with Unlimited Broadband. This may sound low but it is actually pretty sufficient for most everyday web tasks such as sending emails, browsing the internet or doing online banking. Plusnet Unlimited Fibre customers get average speeds of 36Mbps, while those on Unlimited Fibre Extra receive an average of 66Mbps.

A 10Mbps is fine for a household of one or two people and will be enough for most tasks including streaming services such as Netflix and BBC iPlayer. More people in the household doing these things at the same time, however and you're going to need at least the 36Mbps connection to keep things running smoothly, while very busy households should opt for the top speed, or consider an even faster service such as those offered by Virgin Media.

It is worth remembering that the speeds listed represent the average available to 50% of customers, so you may receive a faster or slower speed once connected.

All Plusnet broadband customers get sent an easy set-up router. If you are an Unlimited Broadband (ADSL) customer you will get a basic Hub Zero – a basic affair suited to the lower speeds you'll be getting with that package. Fibre customers will receive the Plusnet Hub One, which has four Ethernet ports and two wireless antennas for 2.4Ghz and 5Ghz wi-fi connections. The Hub One is a much more capable device than the Hub Zero, and in larger households, opting for one of the fibre packages in order to get it is going to be a better choice as you'll be able to make use of the extra range, even if you don't need the extra speed. You can choose to use your own router if it's compatible, though Plusnet would rather you didn't and advises against it. 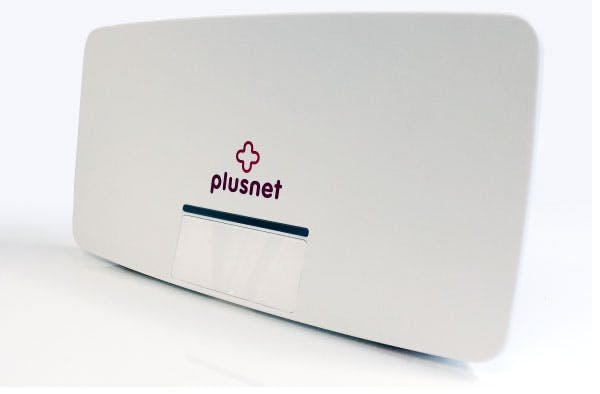 You will need to pay an activation fee to get your broadband set up, but Plusnet says you should be up and running between five to 10 working days if this is the first time you are setting up broadband – or there is a minimum period of 10 days when switching from another provider.

In some cases, an engineer may need to install a new phone line at your property if you don't already have one, or if you're switching over from a cable service. Otherwise you will be sent a plug-and-play router close to your agreed activation date.

Plusnet also warns that you will probably see your speed vary over the first 10 days as the broadband system runs tests to find the best speed for your service. This can cause your speeds to go up and down and sometimes disconnect. To find out more about what to expect, read our guide on broadband installation.

Plusnet’s service and reliability can’t be too bad though. It has a trophy cabinet bursting with customer service accolades.

It regularly has higher customer satisfaction ratings when compared with Sky, Virgin and TalkTalk in the monthly GfK consumer attitudes tracker, and has won awards for its customer service, including winning the Cable.co.uk awards for best customer service and for reliability.

Its customer contact centre is UK-based, is open on live chat or over the phone between 7.30am and 10pm 365 days a year, plus you can identify the best time to call by using live information online that shows how busy the phone lines are.

Occasionally Plusnet will offer cashback or shopping vouchers to draw in new customers, so look out for those. Generally, though, Plusnet prefers to keep its prices as low as possible, including either very low or non-existent set-up fees. Below is a sample of deals Plusnet is currently offering.