Current Post Office broadband customers will be migrated over to Shell Energy broadband over the course of 2021, and the company has said that it won’t change the prices currently paid by Post Office customers. After the switch, customers will also have access to Shell GO+, the reward system which offers discounts on fuel, among other things.

You can find our review of Shell Energy broadband, and below is an overview of the current broadband service provided by the Post Office.

The Post Office’s broadband deals are pretty low cost. In fact its basic package is often among the cheapest on the market. The 38Mbps and 68Mbps packages are also reasonably priced. But, unlike some providers, the Post Office does charge an upfront set-up cost.

Post Office broadband may be no frills, but it’s also very reasonably priced and very low maintenance. When things do go wrong, customer service has improved dramatically from yesteryear, and during our own dealings with Post Office Broadband customer service it has proved itself exemplary.

Post Office broadband isn’t going to win any speed contests, but that’s not the point. It is an ideal, well-priced, fire and forget broadband solution for any home, and it’s especially suited to older people who aren’t perhaps as technically literate as some.

The Post Office’s basic Unlimited Broadband package offers average download speeds of 11Mbps. This should be fine for – small households who are not constantly online. A film would take around seven minutes to download, while 200 photos would need one minute 40 seconds at this speed.

If you’re regularly downloading large files, streaming movies or gaming, then you’ll want a bit more. Especially if there are several devices on the go at the same time. The Post Office’s Unlimited Fibre Broadband package offers average speeds of 38Mbps. This would halve the length of time it takes to download a movie or photos and is better suited to a family home.

With the top of the range Unlimited Fibre Broadband Plus package, you get an average of 67Mbps. With this speed, you’ll be able to download a movie in just 90 seconds or a couple of hundred photos in 21 seconds. This offers greater flexibility and peace of mind and should be the de facto choice for gamers or anyone who streams content at 4K.

With all Post Office broadband services, you can choose from a contract length of 12, 18 or 24 months.

Remember the speeds advertised are an average – legally broadband providers can only advertise the average speed obtainable by at least 50% of their customers. So in theory you have a good chance of getting these speeds. You will be given an estimate of the true speed you can expect from the Post Office before you actually sign up.

Your actual speed could vary for the first 10 days or so of service. As with most networks, this happens as tests are run and the system tries to optimise itself.

The basic router that comes with the Unlimited Broadband package comes with a built-in firewall to protect your home network. It supports both wireless and wired connections, as you would expect. 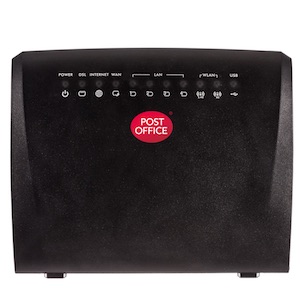 With the other packages you’ll get the Post Office’s Fibre Wifi router, with a signal that’s three times faster. The Post Office promises that both routers are easy to set up – just press a button and off you go. All of which is as much to say there’s nothing particularly special about this router. It’ll work fine, but there are better routers given by providers who will charge you a bit more.

When you sign up, you’ll be sent a router, a welcome pack, your broadband account details and a date for your broadband to go live. If you’re switching from another provider, this has to be a minimum of ten days thanks to Ofcom, which wants to make sure customers have a chance to change their minds.

On the changeover date, says the Post Office, simply plug in the router and follow the instructions in the quick-start guide. But be warned: according to Ofcom, the Post Office often drags its heels a little more than it should. As many as 48% of installations in rural areas take more than two weeks.

The Post Office has a rocky past when it comes to customer service. When it first moved to the TalkTalk network, it switched its customer service to Capita – and things didn’t go well. In October 2015, after Capita failed to meet a number of service level agreements, the Post Office terminated the contract. It moved to a company called HGS, which operates customer and technical support call centres from Scotland.

It would be fair to say things have improved dramatically since those days, with the Post Office Broadband name cropping up commonly in complementary comments concerning customer service in the industry. It’s even won some awards in recent years.

When customers contact the Post Office about their broadband, they have an average minute and a half wait – better than the three-minute average. Nearly one in ten hang up before they’ve managed to speak to anyone, again close to the industry average.