Which is the best UK mobile network provider?

When it comes to pure performance, one network has emerged as a clear winner. Quite simply, EE has the fastest and most widely available mobile network in the UK.

Over the past few years the mobile landscape has transformed through mergers, acquisitions and the arrival of 4G and now 5G. All four networks have made improvements during that time, but when it comes to pure performance they don’t come close to EE.

EE has the best coverage

As the first UK operator to launch 4G in November 2012, EE gained a head start in terms of coverage that it still enjoys to this day. Its service is available to 99.6 percent of the UK population, although it must be noted that its 5G service is still more limited for the time being.

EE’s introduction of 5G has transformed the mobile landscape and is now available in 40 cities and towns across the UK. Customers will need both a signal and a 5G-compatible handset in order to benefit from the extremely fast speeds.

While the initial focus of 4G rollout was on population coverage, EE is now making a big deal about ‘geographic coverage’ in a bid to push home its advantage. Its network is now available to 85 per cent of the UK landmass – equivalent to 99% of the population – and this is set to grow imminently, with the construction of hundreds more 4G sites in more rural areas, as well as improvements to indoor coverage. The provider is also improving connectivity on main roads and railway routes.

EE’s lead in population coverage has been eroded in recent years and all four networks now cover more than 97 per cent. But EE’s commitment to geographic coverage means it’s still out in front of the competition.

Indoor coverage across all networks is still a work in progress, but has been made easier by the arrival of calls over 4G using Voice over LTE (VoLTE) technology and over a home wireless network with Voice over Wi-Fi (VoWi-FI).

EE has the fastest data speeds

In terms of speed, EE enjoys a considerable advantage when it comes to 4G. Performance depends on which device you have, your proximity to a mast at any one time and the number of people on the network. It also matters which part of the country you are in as even 4G isn’t available everywhere yet.

While not all customers will get these headline speeds all the time, it’s still way faster than the competition. In Rootmetrics recent performance test in 2021, Vodafone achieved a median speed of 25.2Mbps, Three managed 19.1Mbps, and O2 only 15.6Mbps.

When it comes to perks, EE offers a range of what it calls Smart Benefits. These include free subscriptions to BT Sport and Apple Music, as well as a Video Data Pass and free roaming abroad, depending on the plan you choose. It will also give you a data bonus if you take out a home broadband subscription (more on that below). 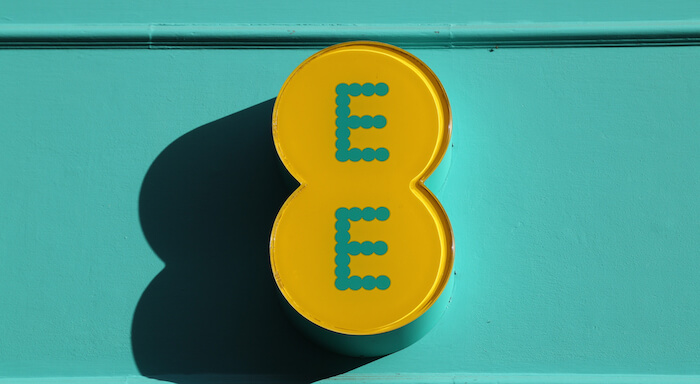 What do other providers offer?

Three’s extras are also impressive. Its ‘Go Roam’ offering lets customers use their data allowances across 71 destinations at no extra charge. This not only includes the EU, but the USA, Australia, Brazil and Hong Kong, but large swathes of South America and Asia.

Vodafone also offers inclusive content with some of its price plans, with customers able to choose from Spotify Premium, YouTube Premium or Amazon Prime, while O2’s Priority is the UK’s biggest digital loyalty programme, offering bonuses like free drinks and meals, prize draws, and early access to gig tickets, as well as discounts on your bill with O2 Rewards.

Customer service is a little more even across the providers. According to Ofcom’s most recent data, EE receives just seven complaints per 100,000 customers, compared to O2 with nine, Three with 15, and Vodafone, which bottoms out with 26. Only Tesco Mobile is better than EE with just three.

EE has made significant improvements to its customer service operations and now answers 100 per cent of calls from its centres in the UK and Ireland, while it has also invested in an improved online chat service.

Of the four major operators, O2 and EE have the highest customer satisfaction rate of 93 per cent, while Vodafone has 90 per cent and Three have 89 per cent. Virtual operators Tesco Mobile and Virgin Mobile command rates of 97 per cent and 93 per cent respectively.

The concept of value for money is subjective, so we’re going to break it down. If you’re after a flexible, cheap SIM-only deal with a modest allowance, then EE isn’t for you. It doesn’t offer a wide range of SIM-only deals either, so you’d be better served by the likes of Three, iD Mobile and giffgaff, all of which offer a large selection of extremely competitive deals.

But EE's SIM-only deals at the higher end of the spectrum compare favourably with the competition, and when you consider the fact that EE is the best network, it makes them difficult to beat. Similarly, with its handsets, the more you’re willing to spend, the better value EE’s proposition is.

It is worth noting that, along with O2, Three and Vodafone, EE offers unlimited data deals. They are the most expensive unlimited deals of the four networks, but on the upside, they also offer the fastest download speeds.

If you want to take advantage of EE’s coverage, but not its tariff, then you could consider one of the MVNOs that use its infrastructure. They are BT Mobile and Plusnet Mobile..

Which EE price plan should I choose?

So if we’ve determined that EE is the best mobile network in the UK, which plan should you go for? EE offers a range of data allowances with its SIM-only plans, all of which are 5G-ready. Whether you want 1GB or unlimited data, EE has a plan to suit your requirements.

If you are looking for a new handset deal, EE has all the latest phones, from iPhones to the Samsung Galaxy, as well as a selection of OPPO and Google Pixel handsets to choose from. Depending on the data allowance you choose, whether it’s with a handset or just SIM-only, you can enjoy up to three of EE’s aforementioned free Smart Benefits – including Apple Music, BT Sport Ultimate and a free Video Data Pass.

When choosing your data allowance, bear in mind that if you take out a home broadband contract with EE too, EE will automatically give you anything between 5GB and 20GB as a bonus, so you may not need as much as you think.