What broadband speed do I need?

In the world of broadband, megabits are abstract. Though most of us understand the more the megabits the faster the broadband, few of us comprehend how that applies to our household. Is 10Mbps enough? What about 50? Or 100?

The aim of this guide is not to present you with more meaningless numbers. Instead we’re going to describe three different scenarios, then add a few extra things to think about at the end. Ultimately, the most important factor affecting the speed you'll need for your household is the number of people that are in it that use the internet.

Before we get into it note that the best advice is to get the best speed you can get at your home, provided said speed is affordable. After all, you can never have too much speed/bandwidth, but it's quite possible to have too little. More on this at the end of the guide.

You either live on your own or as a couple, and you might have a son or daughter or two, but they’re not yet at an age where they use the internet independently of you. The most bandwidth (speed)-intensive things you do online are streaming video content (from iPlayer, Netflix, Amazon and so on) or downloading films. When you do these things, you do them together, rather than independently streaming or downloading things in different rooms and on different devices.

You and/or your partner do a lot of things online. You bank online, shop online and regularly use social media. You do these things apart as well as together, and you both have smartphones and maybe the odd tablet which either or both of you might use for things like sharing photos, video calling via Facetime or Skype, or downloading and reading the latest books from Amazon or the Apple Store.

Either or both of you might like to stream music to a smart speaker or something hooked up to your hi-fi system via bluetooth or your home network, and while you both regularly download and update apps on your phones and/or tablets, no one in the house ever downloads videogames from PlayStation Network, Xbox Live, Nintendo Shop, Steam or some other PC/Mac online storefront.

If your household fits this description more closely than any other the others, you need a standard broadband connection.

The more of you there are in the house, the more likely it is you’re going to be doing things on the internet separately from one another. In this type of household, while you do tend to sit down and enjoy streamed movies and TV together most of the time, sometimes two or three of you are off in different parts of the house doing your own thing. That might extend as far as streaming movies and TV separately, or downloading movies, apps and games, though none of you owns a 4K TV and streams in 4K UHD resolution.

You’re a couple or a single parent with sons and/or daughters who live at home, or perhaps you live in a shared household where you all chip in for the broadband bill. Either way there are at least three of you and you all have smartphones and/or tablets, and you all spend what would be considered, in 2020 as a normal amount of time online. That is, when you’re home, a few hours per day, but none of you are streaming gameplay footage from your console or PC 24/7. Likewise, no one in the household is using file sharing utilities such as BitTorrent.

You live in a large household. A family all of internet-using age, perhaps? Or maybe you’re in a large shared household or student dorm? Whichever of those best fits, there are at least five of you and you tend to do most things separately, rather than sat in the same room all together at the same time.

You all own smartphones, tablets, laptops and so on, and at least three of you have your own internet-ready smart TV or TV-with-streaming-box of some kind. There will be times when you all stream your own programmes at the same time. No more than one person in the house has a 4K TV, but they do stream in 4K ultra-high definition (UHD) on a fairly regular basis.

What’s more, there are internet crunch times in your household. Perhaps you all arrive home from work or school around the same time and all like to get online and do your own thing. This is usually between the hours of four and eight – during this time almost everyone is online doing something at some point. One member or the household might be an avid gamer and like to download the odd console or PC game from time to time.

If this sounds anything like your household, you will need a fast fibre package. Either a top-end fibre deal averaging 65Mbps from any number of UK providers or a or anything faster right up to the flagship 516Mbps broadband deal from Virgin Media.

Special rules for gamers and streamers

The problem with judging the speed you need purely on how many people there are in your house is that it doesn't account much for any one individual whose usage of the home broadband connection is, how shall we say, excessive? 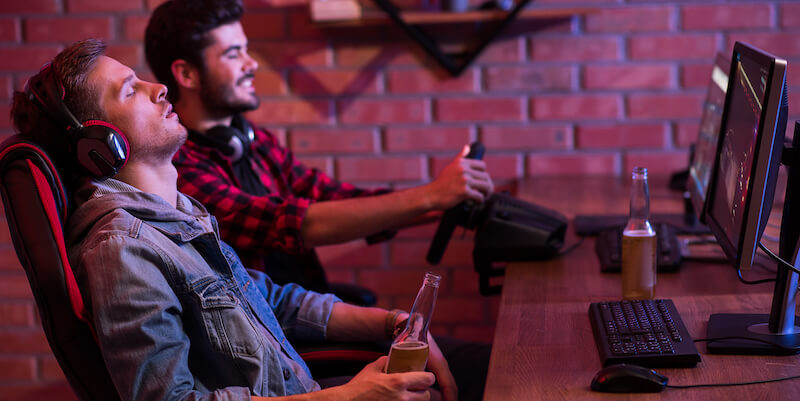 The two groups you should think about here are gamers and 4K streamers. Gamers will frequently need to download games and updates, each of which can be comprised of huge files. While 4K streamers will want to stream movies and TV to their 4K television via Netflix, Amazon, Apple TV, YouTube and so on, which can, on its own, consume anything up to 40Mbps of your home broadband connection.

As a general rule, you should add 30Mbps for each person in your household that downloads games to a console or PC, or streams TV shows in 4K.

Our advice is to get the fastest deal available

Ultimately, no matter how long you spend figuring out exactly what speed you need for your home and choosing the appropriate package, there are always going to be times when the speed you need exceed the speed you get. For this reason, provided it does not levy a significant financial burden, our best advice is to simply get the fastest deal you can afford.

Of course, we would also add that if that deal happens to be 516Mbps from Virgin Media, feel free to scale it back a bit. No household really needs more than 100Mbps, though if there is a lot of downloading of games and movies going on at home, you may wish to consider a bit of extra speed just for sheer convenience.

Knowing you're never going to bump up against speed limits has value in and of itself. So before making your final choice, ask yourself what that is worth to you.

What is a good internet speed?

For low usage households, browsing or shopping online will be fine. It also depends on how you use your broadband and the number of people in your household. Lots of devices, streaming and more than two people – we would recommend a minimum of 30Mbps.

What broadband speed can I get?

Broadband speeds are dependent on where you live in the UK. To find out, check out our broadband in my area page. Simply enter your postcode and we'll show you the broadband speeds in your area.