Save £445 – but hurry, this online exclusive won't last forever

Virgin Media's latest offer on its M100 broadband package, with an average download speed of 108Mbps is, frankly, quite absurd value for money. Let's take a closer look at the ins and outs of this deal and how it's making the competition look rather expensive. 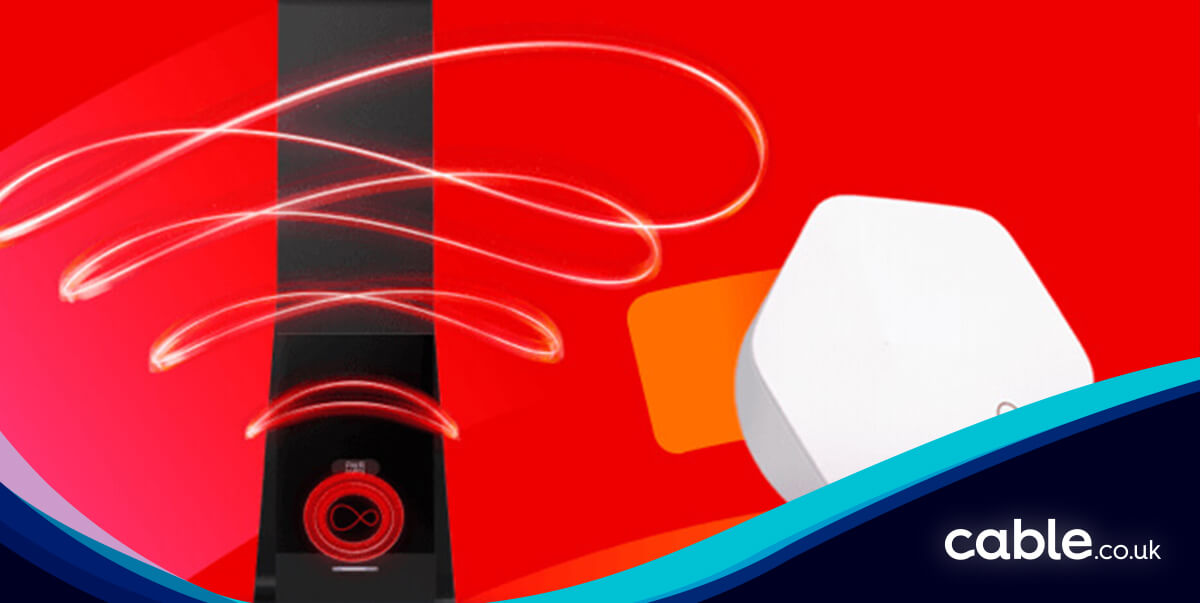 Normally, Virgin Media Broadband's super-speedy M100 package is £44 per month across an 18-month contract, with a total cost of £827 including set-up costs. And in all honesty, though still great broadband, it does get lost among the competition somewhat at that price. However, in this limited-time deal, Virgin has almost halved the monthly cost to just £24 per month, or £382 across the length of the contract. And with the offer also including zero set-up fees, you'll save a whopping £445. That's the price of a PlayStation 5!

That's where the competition starts to look rather silly. Competing deals from the likes of TalkTalk, BT, Sky and others are more expensive, slower, and often with a lower-quality router. Right now, Virgin Media's M100 is the best deal in town, and it's only available online. You cannot get it by phoning Virgin Media, so you will need to use the links you see in this blog.

Forget about 'gigabit' broadband or 'ultrafast' broadband. Almost no one can get it right now, it's expensive if you can, and far, far faster than any household needs. The ideal spot to be for most households is around 100Mbps. Because in most households, any faster would be overkill, and with gaming and streaming being so demanding, any slower likely won't be enough.

Virgin Media is the only provider that offers its customers these speeds universally. That is to say, everyone who can get Virgin Media can get this speed. Moreover, though labelled M100, the average download speed experienced by customers with this package is actually 108Mbps. That's fast enough to download a 5GB HD movie in just six minutes and 37 seconds.

It's more than enough for a household of four people, households with a 4K TV and Netflix, Apple TV+, Amazon 4K and so on. And it's more than enough to keep gamers happy. What's more, Virgin Media Broadband has some of the lowest latency in the UK, which is especially useful for gamers who play online competitive shooters such a Call of Duty or Overwatch.

For more information, see our guide to getting broadband installed.

Obviously, most routers that you could buy separately, if you're flush enough to afford it, will perform better than any of the free, provider-supplied routers. However, among that group the Virgin Media Hub 3 fares well.

The Hub 3 uses the fast wireless standard, catchily titled 802.11ac (or wifi 5). This standard has been superseded recently, by 802.11x (or wifi 6), but don't give that a second thought. Almost no devices currently support wifi 6 unless they were bought in the last few months, and even then support is unlikely. So compatibility of the Hub 3 is perfect. You'll get four LAN ports and two wifi networks (2.4Ghz and 5Ghz). Range is good, and it has a neat modem mode if you want to add your own router later.

Installation and switching are very easy

Because Virgin Media runs on its own fibre network (where almost all the other providers run on Openreach), you'll need to contact your existing provider to tell them you're leaving, after you have signed up with Virgin Media. Just be sure you are out of your contract period so you won't have to pay cancellation fees. This will change in April 2023, when you will only need sign up and won't need to tell your existing provider, but for now that's the way it is.

During the sign-up process you will get to book your engineer appointment. For the installation, an engineer will have to visit your property and hook you up to the Virgin network, so you will need to pick a time and day when you will be home. If you already have a Virgin Media line into your home its sometimes possible for Virgin to simply post you a router for you to plug in, but you will need to clarify with Virgin during the sign-up process.

Bear in mind that Virgin Media will need to run a cable into your property, and what this entails will vary from household to household. But one thing in common no matter where you live is that they will need to drill a hole through your wall from the outside to run the cable through. This is why if you do not own your property you will need permission from the landlord for the work to be undertaken.

There are no setup fees

Most providers have set-up costs of some kind, whether that's charging you through the nose for the engineer visit or something smaller like charging you the postage of your router. Indeed, Virgin Media will normally charge you a set-up cost before sending an engineer out to hook you up. In this special M100 deal the set-up costs have been waived. Everything is free. Router, engineer visit, everything. Not bad. Not bad at all.

And Virgin Media is one of the very best providers

As you can see from our Virgin Media Broadband review, Virgin Media is perhaps the best widely available broadband provider in the UK. It has the fastest speeds, the best reliability (according to Ofcom), and some of the best equipment.

In our annual Cable.co.uk broadband customer survey where we ask actual customers of all the main providers about their experiences, Virgin Media came near the top of the table for quality of equipment (router), ease of switching, and speed satisfaction.