Giffgaff advertises itself as the 'mobile network run by you'. It is, currently, the only UK provider whose 'members' (not customers) help one another out in place of a call centre. It could have been a total disaster. But it's not.

Giffgaff is one of the little guys. A provider that is held together by its community, but is not a network holder itself. It's what's called a mobile virtual network operator, or MVNO. It runs on the O2 network, which means that, as a giffgaff customer, you'll benefit from the coverage and 4G/5G speeds that O2 provides nationwide.

Giffgaff's focus on its community of members has led to some quite extraordinarily positive word-of-mouth. The fact that giffgaff has no call centres to staff and otherwise relatively inexpensive overheads also means it commonly offers some of the cheapest SIM-only and handset deals in the country.

Giffgaff currently offers handsets from a wide range of manufacturers, with the option to buy outright, or to pay off the value of the handset in instalments over 24 months. Giffgaff offers both the newest flagship phones from Apple and Samsung as well as refurbished models. You can even sell your existing phone to giffgaff and either pocket the cash or put it towards a new handset.

Giffgaff also offers a wide variety of SIM-only deals that it refers to as 'goodybags'. This is somewhat annoying for two reasons: (1) they're just SIMs – not goodies – and they don't come in a bag, and (2) giffgaff loves the lower-case 'g' so much it applies it to this, too. So don’t take the name literally – it's just a SIM with various amounts of minutes, texts and data.

It now offers two tiers of goodybags – standard goodybags and golden goodybags. The golden goodybags offer even better value for money, but are only available to customers who are prepared to set their plan to recur each month and save a payment card, although when you consider that most people would probably want the convenience of doing this anyway, it’s a bit of a no-brainer. You can still switch your plan up and down each month too.

In terms of where giffgaff sits in the wider market, it's almost always among the cheapest out there. The question that usually follows that, of course, is whether the service itself is lacking in any way? No. Definitively no. But it is different.

Giffgaff has pretty much everything and anything you could be looking for when it comes to phones. Either new, or refurbished, you'll be able to get everything from an iPhone SE or Samsung Galaxy S12, through to the very latest handsets such as the iPhone 12 Pro, or Galaxy S21.

Apologies for the clear bias towards Apple and Samsung evident in our examples here, it's just you can only have so many examples, and these are the phones most people either have or want to have. You'll also find phones from Sony, Huawei, Alcatel, Doro, Oppo, Motorola and Nokia on the giffgaff website, meaning giffgaff has pretty much all tastes and budgets covered.

Unlike some of the bigger providers, giffgaff does not offer a choice of tablets with SIMs or other smart tech such as VR headsets, so if you’re after that kind of thing you’ll be better off looking at another provider such as O2 or EE.

As previously alluded to, customer service with giffgaff is a very different proposition from any other provider you could name. How 'good' or 'bad' the experience is doesn't rely on how upbeat the call centre employee is, but how responsive the giffgaff community is and how extensive its knowledge base.

The community is divided into sections covering service updates, help and support, tips and guides and a lot more. All of which sounds great, but the proof is in the pudding: what do giffgaff users make of this system and how well does it work for the average customer?

In Ofcom’s latest report on the levels of customer satisfaction amongst mobile providers, giffgaff ranked extremely well, with 95% of customers saying they were satisfied with the service overall. Only Tesco Mobile did better, with 97% and a sector average of 93%.

As alluded to further up the page, giffgaff is often second to none when it comes to value for money. In fact, there have been numerous occasions when the latest iPhone is to be found cheapest with giffgaff. That's because giffgaff not only doesn't have to support its own network (it uses O2's), but it doesn't need to make its customers bear the weight of all that infrastructure other network providers tend to have, from highstreet shops to call centres.

Ofcom’s latest research shows that 96% of giffgaff customers are satisfied with their value for money – almost ten percent above the sector average, providing pretty solid evidence that giffgaff is a good bet when it comes to a reliable mobile provider.

You can use our comparison tool to see how giffgaff's current range of handset and SIM-only deals stacks up price-wise against the competition. 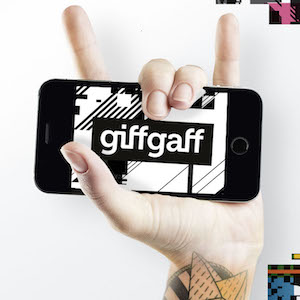 Giffgaff operates on O2's network that covers 99% of the UK population, with 4G widely available. O2’s 5G network is growing but is currently still more limited than 4G. Giffgaff currently only offers 5G with its golden goodybags - the standard goodybags come with 4G. Bear in mind that a 5G-ready SIM will only provide a 5G signal if you have a 5G-ready phone and live in an area that has 5G.

According to Ofcom’s latest customer satisfaction survey 86% of giffgaff customers are satisfied with their signal and reception. This is a fraction above the sector average of 85%.

It’s worth bearing in mind that although O2 claims to offer 4G to 99% of the population both indoors and outdoors, the signal can still be affected by local geography, such as hills or large buildings that may stand between you and your nearest mast.

These issues do apply to all mobile providers, however. To find out what sort of signal is available where you live, you can use giffgaff’s O2 network coverage checker.

We admire giffgaff very much. It's a company that decided to do things differently. Not only do its systems work, not only does it have a lot of very happy customers, but the savings it makes by not having all that additional infrastructure are actually passed back to its customers. Giffgaff is one of our favourite providers and we would not hesitate for a second in recommending it.