We're all used to being online pretty much no matter where we are and what we're doing these days. But there are some situations where that's going to be difficult. Perhaps you work at multiple locations and need your laptop to always be online, or you simply can't get fixed-line broadband where you live? Whatever the reason, either a mobile broadband dongle, or a MiFi device may be the answer. But what are they, and how do they work?

What is mobile broadband and how does it work?

Mobile broadband is a connection to the internet (usually for your laptop) that you can use anywhere. It's provided via three different types of device, each of them subtly different, and each suited to different jobs. They are…

Dongles are the most common way you can get mobile broadband. They come in the form of small, stick-style 'keys' that fit into the USB socket on your laptop computer. If you're not sure what USB is, do not worry – all computers have at least one USB socket.

The dongle then connects to the internet via whichever 4G network you bought it from. If you buy a dongle from EE, for example, it will connect to the EE network in the same way your phone does. Your laptop will then be able to use this connection to access the internet.

Unlike a dongle, which can only be used by the device it's plugged into via USB (pretty much only a laptop), a MiFi device acts like a broadband router. It creates a 'personal wifi hotspot' that allows any device that can connect to wifi to connect to it, provided they have the password. Your phone, your friends' phone, your tablet, your camera – whatever devices you want to get online. Lots of them at the same time, should you so wish.

Many mobile SIM deals these days allow something called 'tethering'. This is where you create a personal wifi hotspot using your phone, allowing you or anyone else with the password to use its connection to the internet as if it were a router.

Not all providers and plans allow tethering, and some have strict tethering data allowances, so it's a good idea to check what you can and can't do on your current plan.

If you are the sort of person – in business, a student perhaps – who travels everywhere with your laptop, answering emails and racking up the spreadsheet hours, mobile broadband in the form of either a 4G dongle or a MiFi device may be for you. It can also be one of the only available solutions if you're somewhere where there's no other means of getting online.

However, with so many mobile tethering plans out there, dongles and MiFi devices are in declining demand. Don't get us wrong, they serve a purpose; they're designed to do one thing only, and they do it better than your phone ever will. But you need to be someone who needs mobile broadband or a mobile hotspot a lot to justify it. A couple of times a month and it's going to be more cost-effective to tether.

There aren't all that many companies who still offer them. Most of those who do are the companies that run the UK's four mobile networks (Three, O2, Vodafone and EE), with the addition of Virgin Media and BT, which offer mobile broadband on their main broadband sites.

Dongles vs MiFi – Which is right for me?

Confused about which type of mobile broadband to get? Let's make it simple.

In essence, what is usually referred to as a 'dongle', a 'USB dongle', or a 'mobile broadband dongle' plugs into the USB port of your laptop or desktop computer, providing internet connectivity to that device and that device only. So…

Get a dongle if you want your laptop to have access to the internet wherever you go, but you don't need to provide access either to anyone else, or to any other device.

Get a 4G MiFi device if…

A 4G MiFi device also plugs into the USB port on your laptop of computer, but acts like a router you can use while you're out and about, allowing anything or anyone to connect to it and use the internet (provided they have the password). So…

Get a MiFi device if you want multiple devices and/or people to have access to the internet when you're out and about. 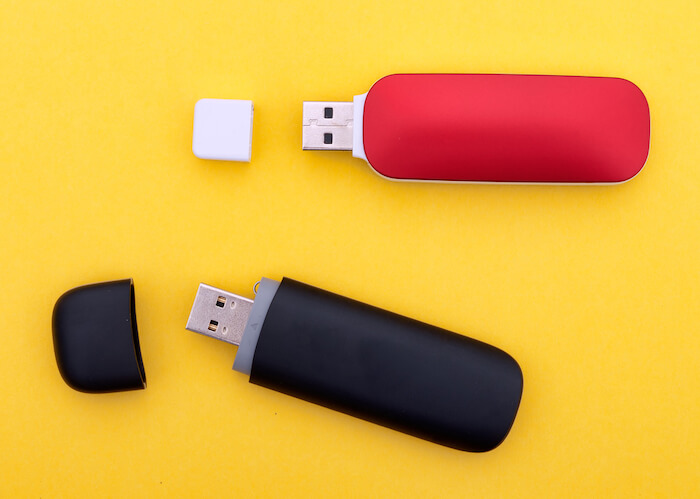 How to choose the right dongle or MiFi

You need mobile broadband in your life and tethering to your phone just isn't an option – maybe it'll eat up too much of your phone's monthly data allowance. Maybe it's just too fiddly. Maybe you don't want your colleagues or friends using your phone as a hotspot. So how do you go about choosing the right deal?

What are the alternatives to dongles and MiFi?

Tethering would be the first, best alternative. This is where you use your mobile phone as a wifi hotspot, provided your mobile provider allows it under your plan. The other alternative is to use public wifi hotspots. Many public places, buses, trains, stations, libraries, coffee shops, airports, hotels and commercial centres offer free public wifi. You never know, you may luck out and almost never be out of range of one of them.

What is a mobile wifi hotspot?

A mobile wifi hotspot is a wifi signal you can connect your devices to that uses another device – usually your phone or a dedicated MiFi device (as described above) – as a router. The device connects to the internet via your mobile deal, and you connect to it via wifi.

Are dongles and MiFi secure?

Yes. A traditional stick-style dongle can only provide connectivity to the device its plugged into, while in the case of MiFi devices, no one can access them without your password.

What's the difference between mobile broadband and wifi?

Mobile broadband is broadband provided over wifi via a device you carry with you – either your phone or a 4G MiFi device. Wifi just refers to any wireless internet access: Public, at home, wherever.

How do I check mobile broadband coverage?

Mobile broadband coverage is identical to mobile phone data coverage, so if you want to know what the coverage of 4G mobile broadband from Vodafone is, for example, you need only check its 4G mobile data map. Same goes for all providers.

Can I use mobile broadband dongles abroad?

How much do mobile broadband dongles and MiFi cost?

Generally you'll find they cost about the same as equivalent mobile data deals. You can compare prices here. They can be cheap, or they can be expensive – it all depends on the provider you pick and the monthly data allowance.

Are dongles easy to install and use?

Yes. In most cases, with both stick-style dongles and USB MiFi devices, you simply plug it in and your operating system will do the rest. They just work. If there is anything more complex than that required to set it up, instructions will arrive with the dongle.

Can I use a mobile broadband dongle as wifi?

A traditional dongle? No. The term 'dongle' refers primarily to stick-style USB devices that provide connectivity to only one machine – the one it's plugged into. With 4G MiFi devices you can, as they act like mobile routers.

Can I get unlimited mobile broadband?

Yes. Three is the only provider that currently offers it, however.

Is my phone SIM the same as MiFi?

It can be. If your phone allows tethering, using it by switching on its 'personal wifi hotspot' essentially turns it into a MiFi device.

Can I connect a dongle to my home router?

No. Home routers need to be connected to fixed-line broadband.