With four network providers, a multitude of individual providers spread across them, and four different technologies on the go all at once, understanding coverage is now a lot more complex than it used to be. But don't panic. Take our hand as we explain it all in a way anyone can understand.

How to find the best signal in your area

Despite the fact there are a great many providers operating in the UK, only four of them operate their own network, while the others piggyback their service onto one of these four. When checking signal, then, this is useful to know, since you really only need to check the coverage of four operators.

Nevertheless, we expect you have your heart set on a specific provider, so we've provided links to the coverage checkers for each. When visiting and checking coverage where you live and/or work, we recommend paying special attention to the signal you're likely to get indoors, as this can vary enormously compared to outdoors.

It's also worth bearing in mind that when you are inside, either at home or work, most of us will have access to wifi, meaning we don't generally need to rely on our providers for either data or calling coverage, since we can both download and call out using the wifi.

EE was the first UK network to offer 5G, having also been first to market with 4G. EE is now owned by BT which bought the network operator in 2016. EE’s 4G network currently covers more than 84% of the UK’s landmass, with plans in place to increase coverage to 99% by the middle of the decade. At the time of writing, its 5G network is available in 168 UK towns and cities. Providers who piggyback on the EE network are currently BT Mobile and Plusnet Mobile.

Population-wise, EE covers 99% of UK residents. This includes all the major cities and their suburbs. O2, Three and Vodafone also have their own 4G networks, all of which are hitting around the 99% coverage mark..

O2 launched its 4G service back in August 2013. Its 4G broadband signal now covers around 99% of the UK population, so it’s likely O2’s 4G will cover where you live/work.

Other providers who piggyback on the O2 network are giffgaff, Tesco Mobile, Sky Mobile and Lyca Mobile.

O2 launched its 5G service in October 2019 in around 20 towns and cities. It’s 5G service is now available in more than 150 towns and Cities across the UK, suggesting a steady roll out of this service.

Vodafone’s 4G network also started in August 2013, and, like the other three networks, it now covers 99% of the UK population. Make sure you check Vodafone’s coverage before you purchase a 4G package as it will cover different areas than the others. This advice applies to any of the networks, particularly if you live in a rural area. Most people live in towns and cities, so coverage of the population does not equal coverage of geography

Providers piggybacking on the Vodafone network are VOXI – which is owned by Vodafone – Talk Mobile, Virgin Mobile and Lebara Mobile.

At the time of writing, Vodafone offers a 5G service in 124 towns and cities, but it doesn’t publicise targets for future 5G roll out. However, it seems safe to assume it will continue its expansion at a similar pace to remain competitive.

Three was a little late to the party, with its 4G signal going live at the end of 2013, but it now covers 99% of the population. Make sure you check Three’s coverage in your area before purchasing a 4G plan, since population coverage is not the same as geographical coverage. Despite 5G, all the networks are still working on increasing their 4G coverage – it’s a competitive business and they have regulator Ofcom watching over them.

Other providers piggybacking on the Three network are iD Mobile, FreedomPop and SMARTY (owned by Three).

Three has also been the slowest out of the gate with its 5G rollout – sensibly, in our opinion, since there isn't a lot you can do with 5G you can't do with 4G right now. Three 5G is currently available in 66 towns and cities around the UK. Three has not offered target dates for further 5G rollout beyond saying that it is happening.

The G in 3G, 4G, 5G and so on stands for 'generation'. All 3G really means is that it is the third generation of mobile telecommunications infrastructure. It differs most substantially from its predecessor, 2G, in that it focuses on data transfer. 2G offered limited data access at ultra-slow download speeds, where 3G, with its somewhat paltry average 6.1Mbps download speed at least offers a reasonable chance of browsing the web, answering emails and even watching the odd YouTube video here and there.

Ultimately, though, you can no longer take out a plan with 3G data. The network, with its older technology, is still there in places. Where a 4G signal isn't available you may see your signal 'step down' to 3G to keep you connected. 3G is no longer relevant to conversations around package choice, though.

The average speed for 3G in the UK, when it was the dominant mobile network technology was 6.1Mbps download, and 1.6Mbps upload.

Where is 3G available?

Both everywhere and nowhere. You will need to be somewhere your 4G or 5G plan can't get those services. In those cases it will search for a 3G signal if available. 3G is all but phased out and there are no 3G mobile deals available anymore.

Back in the dark ages (otherwise known as the early nineties) we had only 2G technology. This was suitable for making calls and sending text messages, but that’s it. By the late nineties, 3G had made it possible to access the internet through our phones (how we coped until then, nobody knows).

Everything changed again when 4G hit the UK in 2012 (some other countries got it a bit earlier). The 4G network made it much quicker to surf the web on mobiles, tablets and laptops. The combo of smartphones and 4G has opened up a whole new world of web use that the 3G network simply couldn’t cope with. As well as allowing us to email and browse the web on the move, 4G means we can stream video, listen to music, and map our journeys while we’re out and about.

4G is super speedy. According to Ofcom, it would take about 20 minutes to download an album on a 3G phone but around three minutes on 4G. 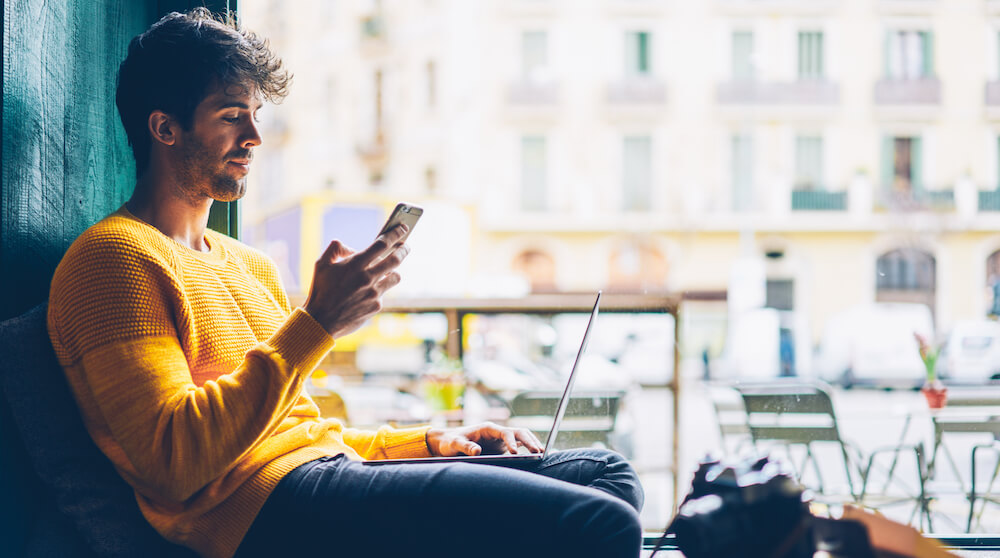 Standard 4G (or 4G LTE) offers theoretical speeds of up to 150Mbps, although in reality speeds are more like 80Mbps. Yes, 80Mbps – that’s faster than most residential broadband connections.

A newer, faster, version of 4G called 4G LTE-Advanced (also known as LTE-A, 4.5G or 4G+) is available in many parts of the UK. LTE-A offers theoretical speeds of up to 1.5Gbps, but most LTE-A networks have a maximum potential speed of about 300Mbps, with actual speeds experienced likely to be more in the region of 80-120Mbps.

Where is 4G available?

Everywhere. 4G is still currently the technology everyone uses, and so covers more than 99% of the Uk population no matter which network you choose.

This is the million-dollar question. For years 5G has had no official specification, only a general understanding that, like 4G before it, it was to be the next, yet-faster mobile data transfer technology.

5G is 4G, only faster. But unfortunately, the technology itself is rather different, meaning you need a 5G-capable phone to access the service. In addition, you must live somewhere where you can receive a 5G signal from one of the UK's four network providers: Three, O2, Vodafone or EE. Other providers offer 5G, but they all deliver their services via one of those four networks.

In perfect, laboratory conditions, 5G has been tested running at a totally crazy 2.8Gbps. That's 2,800Mbps, or roughly 38 times faster than the fastest speeds most people can currently get on their home broadband connections. However, the lab is the lab, and in the real world it's unlikely you will see the needle go beyond 300Mbps.

But even at those sorts of speeds, 5G has a problem. There are currently no everyday applications that need that sort of speed to be delivered to a mobile phone. Three and some others say things like 'download 4K movies in seconds', but since 4K movies can only be streamed, not downloaded, it's all mostly nonsense. For now, 5G still isn't worth paying a premium for, while at some point in the future it'll simply be the norm.

Where is 5G available?

In the section further up, you can see which cities and towns 5G is currently available in with each of the UK's four network providers. Rollout has been relatively slow, though many larger towns and cities now have access. If you're hoping 5G is going to become available at your broadband-blighted rural location, you are going to be in for a bit of a wait. It will be at least a few years before the focus moves away from large towns and cities. According to EE perhaps around 2028.

Do I need a 5G compatible-phone to access 5G?

Yes you do, while as smartphones are now 4G-compatible, very few are 5G compatible, and those that are are extremely expensive. If you’re not sure, check your model on your phone manufacturer’s website, but if you got your phone before the second half of 2019, it's pretty safe to say it won't do 5G. You can get 4G phones on contracts or you can buy one outright and pair it with a SIM-only tariff.

Will I need a different SIM card?

You need to be on a 4G tariff to access 4G. Most networks offer 4G as standard now so your SIM card should be fine. If you’re on an ancient 3G tariff, ask your network for an upgrade.

If you can’t yet sample the delights of lightning-fast connectivity on your mobile phone, then there are alternatives. Mobiles that use the 3G network can still accomplish most of your needs.

If you have a 4G phone and SIM and find yourself in a 4G not-spot, you’ll simply fall back to 3G coverage. You’ll be able to see which type of network you’re on as 3G or 4G will be displayed next to the signal bars at the top of your phone’s display.

When is 5G coming?

It's already here, though mainly confined to certain areas of towns and cities. The fifth generation of mobile networks is far faster than previous generations. You will need a 5G compatible phone, however, and you will have to live somewhere you can get it.