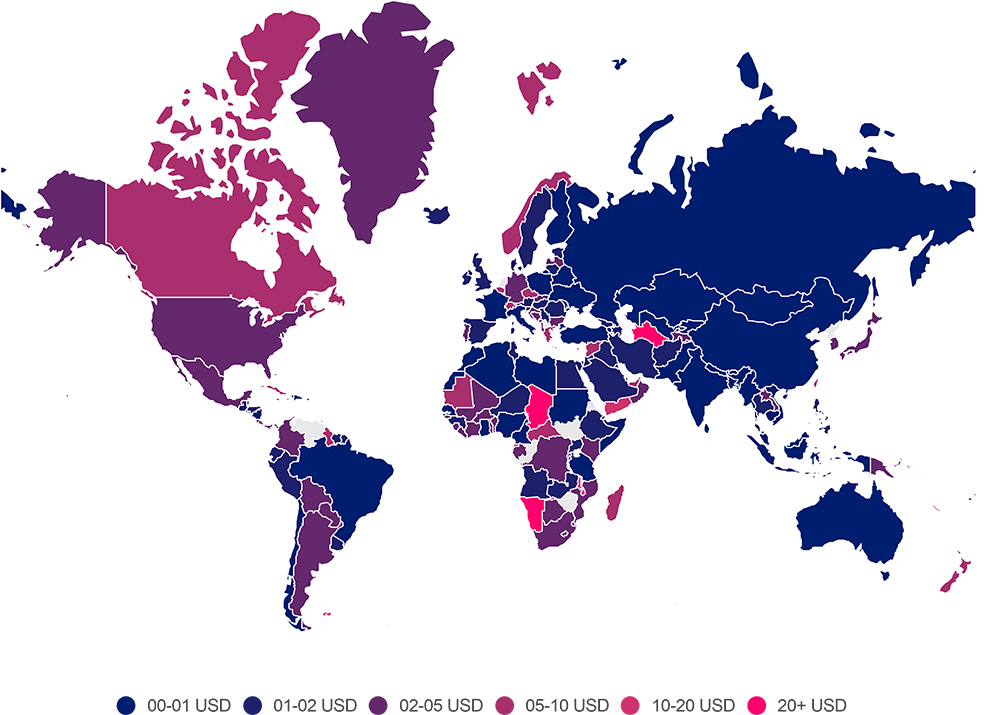 Israel is the new chart-topper

Across the last three years that we have run this study, Israel has continuously made great leaps forward up the leaderboard. This year, it has taken the number one spot, with an average cost per 1GB of mobile data of just USD 0.05. Or five cents, in plain English.

This is quite staggeringly cheap. The introduction of 5G into Israel's urban centres, along with ubiquitous 4G LTE which is now well on the way to offering unlimited data packages, is no doubt a major contributing factor to the outstandingly low cost of data. 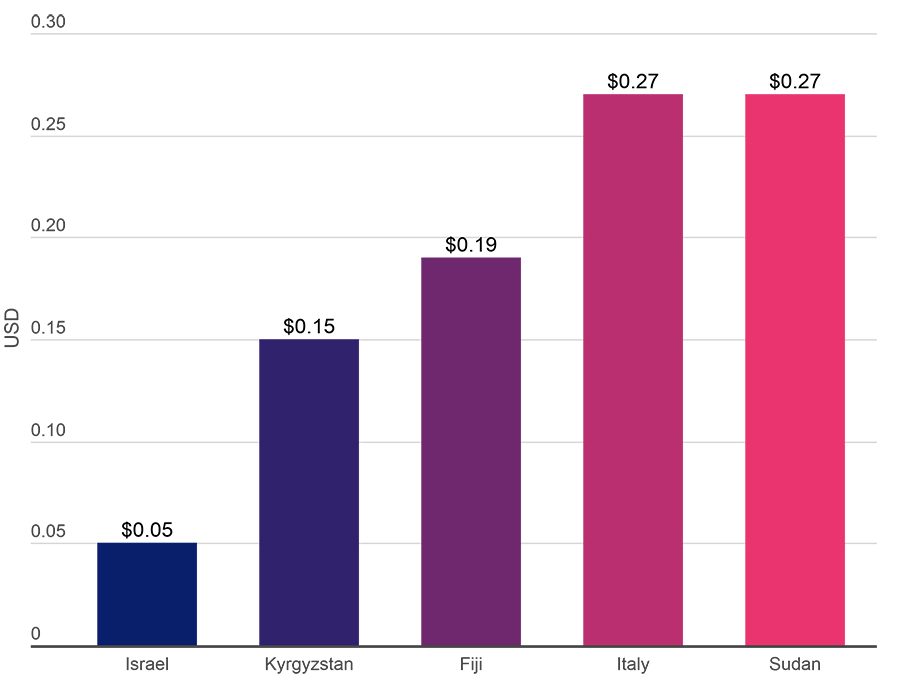 According to budde.com, an independent producer of telecoms research and statistics, "Coverage of LTE services in Israel is high, while the regulator in August 2020 also concluded an important multi-spectrum auction to enable operators to forge ahead with their 5G plans. The mobile operators have also been active with mergers and acquisitions in recent months, most recently (August 220) with Cellcom acquiring Golan Telecom. A condition of the deal was that Golan Telecom change its MNO licence to an MVNO license."

Western Europe, which includes the UK, continues to be surprisingly expensive compared to much of the developing world, with most countries finding themselves mid-table. However, when taken as a whole, Western European countries are some of the furthest along towards ubiquitous unlimited data offerings, with Norway inarguably leading that charge. This raises certain questions for the future of a study that measures the cost per unit of mobile data. We'll get to that a bit further down.

The UK's rather lacklustre overall placement of 78th is actually unsurprising in the context of Western Europe. Sure, we're not as cheap as Italy or France, but we find ourselves somewhere in the middle. Mobile data plans in the UK are affordable for most UK residents and ultimately that is something that has to be true for every country included in the study.

The UK mobile marketplace remains healthy despite the pandemic, though the slowing of 5G rollout for political reasons has, some might argue, stagnated the increasing value for money we had seen in previous years.

North Africa the surprising cheapest region in the world

Perhaps the biggest surprise this year has been the dominance of North African nations at the top of the table. The regional average is the cheapest of any of the 13 global regions the study subdivides into. It is perhaps surprising then that no individual nation in the region makes it into the top ten. Rather that six of seven of the nations in the region are in the top 60 cheapest countries, with outlier Mauritania the only exception, offering mobile data more than five times as expensive on average than any of its neighbours.

So why does North Africa fare so well on average? One part of this answer is simply reliance. Across the region, mobile data tends to be the dominant way people get online day to day. It has to be affordable, and affordable in Northern African nations also tends to be what could be regarded as 'cheap' when measured against the global picture.

This is coupled with what tends to be pretty solid and reliable mobile infrastructure, and competitive marketplaces, both of which tend to drive pricing further downward. Mauritania, the exception to the low costs seen across the rest of the region, is notable, in fact, for only containing two dominant providers. Something commonly referred to as a 'duopoly'.

Sub-Saharan Africa the worst place to be for mobile data

Why is it, then, that the countries in the Norther part of the African continent are so cheap for mobile data, while conversely those in Sub-Saharan Africa are among the most expensive in the world?

It would seem at first glance that many Sub-Saharan African nations share similarities with their neighbours in the North. Many countries have populations that rely on mobile data to get online. Economies are smaller and earnings tend to be low. These two factors would normally see low pricing as a result.

Where things tend to depart here comes down to usage. The fact is there are many countries in Sub-Saharan Africa where a relatively small percentage of the population owns a smartphone. This means there are a lot of countries where smartphone ownership, and therefore internet access via a smartphone, is still considered an expensive luxury. In some places, even too expensive for the middle classes.

With relatively low take-up, telcos then have to charge an arm and a leg to their small customer base to cover the cost of their infrastructural investment and running costs. The situation is slowly changing as take-up increases, but the truth is that the cost of mobile data plans in Sub-Saharan Africa is falling the slowest there of anywhere in the world.

One thing that is becoming an increasingly important factor in our study is the arrival of unlimited packages in various countries around the world. As things stand in 2021, they remain few enough to disregard in our measurements. However, we anticipate that by 2023 they will be ubiquitous enough that a complete reimagining of our testing methodology will be necessary. What, after all, is 30 dollars divided by infinity?

Plans are already in motion to make those changes, but for now, we hope you are able to glean some interesting and useful information from our study, and we will see you again this time next year!