Sky Kids is a bundle of entertainment for the young ones in your family. With eight channels dedicated to kids TV as well as thousands of episodes of all the favourite shows available on demand, it is an appealing prospect for primary-age children.

Sky Kids offers TV shows for all age groups, from simple, educational programmes for toddlers to cooler, edgier stuff for those in the later years of primary school. In this guide we look at which TV providers offer Sky Kids, how much it costs, what they can watch, and whether it’s worth investing in it. 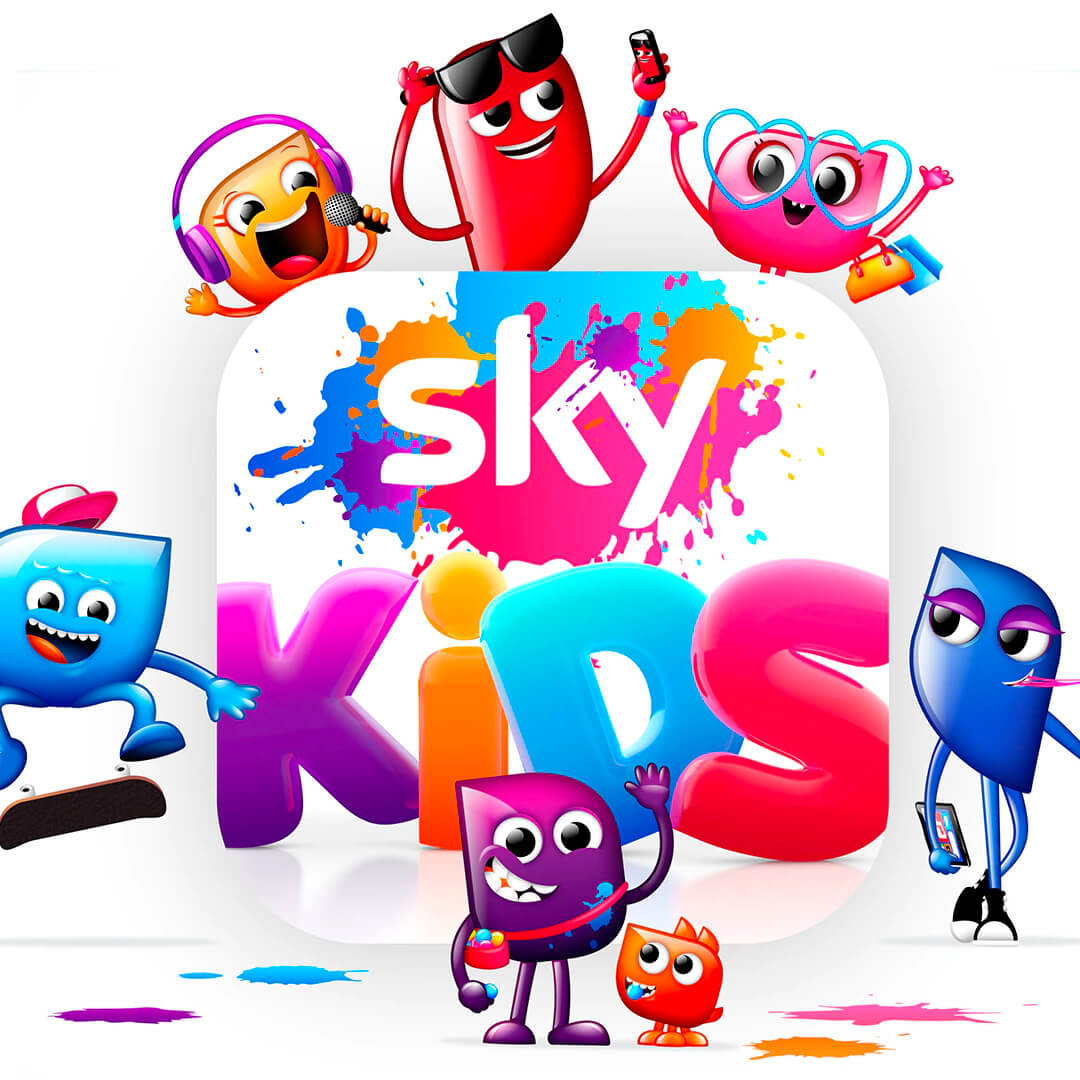 Sky Kids is a paid-for add-on available with Sky TV or as part of the NOW TV Entertainment membership. It comes with eight channels containing hours of live and on demand entertainment for primary age children.

In recent years the content included in Sky Kids has shrunk, especially when Disney created the Disney+ app and retrieved all its content from Sky, including the Disney Junior channel which is now only available with Disney+. However, for lovers of Peppa Pig and Paw Patrol, Sky Kids is ideal and will guarantee keeping the littlest members of your household happy.

As well as the TV shows, Sky Kids is also available as an app which includes games featuring some of the favourite characters, including Peppa Pig’s Memory Game, SpongeBob Chess and Henry Danger Target Practice, as well as Sky Kids Art Studio. Games can be downloaded to play offline and parents can set age profiles to ensure their children only have access to age-appropriate TV shows. Plus, Sleep Mode allows parents to control how much time their little ones spend on the screen.

Nickelodeon is an ever-popular children’s TV channel and the parent channel of Nick Jr. and Nicktoons. It is famous for shows such as Spongebob Squarepants, iCarly, Horrid Henry, and The Thundermans to name but a few. Along with the cartoons and kids dramas however, there is also the odd educational show, such as Extraordinary Me, which looks into the lives of extraordinary children around the world.

Aimed at a younger audience even than Nickelodeon, Nick Jr. offers a wealth of much-loved favourites, including Ben and Holly’s Little Kingdom and Paw Patrol. Relative newcomers such as Blaze and the Monster Machines and Santiago of the Seas sit alongside educational programmes such as Bubble Guppies and Blue’s Clues and You!. In addition, Baby Shark’s Big Show explores social and emotional learning.

Nick Jr. Too offers more of the same fare as Nick Jr. but tends to focus solely on showing hours and hours of Peppa Pig, Ben and Holly’s Little Kingdom, Paw Patrol and little else. If you have some young fans of George Pig or Nanny Plum, this will be most welcome news.

As the name suggests, Nicktoons shows mostly cartoons and animated TV shows, many of them reruns of original broadcasts on Nickelodeon. From Alvin and The Chipmunks and Horrid Henry to Takeshi’s Castle and The Loud House, Nicktoons offers plenty of fun for ages 7-11.

Cartoon Network is aimed at children, especially boys, between the ages of six and 14 and is jam-packed with animated entertainment, largely of the edgy and surreal variety. Popular shows include The Amazing World of Gumball, Teen Titans Go, Unikitty and Ben 10. Jellystone! is a recent spin-off of the classic Top Cat series and Ninjago: Masters of Spinjitsu is a hit with Lego fans.

Cartoonito is Cartoon Network’s little sibling, aimed at the younger age group, with gentle shows such as Fireman Sam, Masha and The Bear and Thomas and Friends. A bit of educational viewing is included in the form of Cocomelon. Young aviation fans will love Super Wings, with its cast of aeroplanes that transform into robots and save the day.

Aimed at children aged between four and seven, Boomerang offers lots of lighthearted animation, from ever-popular classics such as Tom and Jerry and What’s New Scooby Doo? As well as more modern, crazy fun with Taffy the raccoon. The sweet mushrooms in Mush-Mush and the Mushables are very appealing to little ones whereas the surreal antics of Lamput will likely appeal to slightly older children.

For the youngest viewers in the household, Baby TV offers gentle entertainment and education for age four and under. Charlie and The Numbers provides an introduction to numeracy and Little Lola takes youngsters on a journey of discovery into different environments from the town to the farm. Beep Beep and Billy and Bam Bam both cover the topic of building friendships.

Sky Kids is only available as a subscription and comes bundled up with another TV service, whether that is Virgin Media, Sky TV, BT TV or NOW TV.

To watch Sky Kids with Sky, you will have to pay an extra £6 per month. The package comes on a 31-day contract so you can cancel at any time. It is available to bolt on to any Sky TV package much like Sky Cinema or Sky Sports. You can also watch it when you are out and about by using the Sky Go app or the dedicated Sky Kids app, which also has games on it to keep the kids amused – perfect if you want a bit of peace and quiet on a car journey.

As with Sky Cinema and Sky Sports, BT offers Sky Kids in the form of a NOW TV Entertainment membership that forms an integral part of the BT Entertainment, Big Entertainment and VIP packages.

Virgin does not offer Sky Kids as such, but it does include the same channels – Cartoonito, Nickelodeon and Boomerang – for free as part of its packages. So if you are already a Virgin Media TV customer, it is likely you already have access to these channels.

Sky Kids is now bundled up with the NOW TV Entertainment Membership, rather than be available as a separate subscription. NOW TV Entertainment cost around a tenner a month and comes on a rolling monthly contract so you can cancel at any time. You can watch NOW TV on your TV, on a desktop computer, a laptop, a games console and also on tablets and smartphones, which could come in handy if you need to provide your youngster with some entertainment when you are out and about.

If you want to maximise the number of devices on which you can access NOW TV Entertainment and Kids, you will need to pay extra for the NOW TV Boost. This costs an extra fiver a month and enables you to watch on three devices at the same time, rather than just one. As a bonus, it also gives you full HD, which is probably more of a benefit for the parents than the children.

What’s the cheapest way to get Sky Kids?

The cheapest way to get the Sky Kids channels is with Virgin Media. Although not advertised as Sky Kids, you do get exactly the same channels for free as part of any Virgin Media TV package.

As Sky only offers a handful of kids channels, it may be worth considering some other options for children’s entertainment. In recent years, the launch of Disney+ meant that all Disney content was pulled from the Sky channels and given a new home of its own. The Disney+ offers a wealth of child-friendly shows and films, from Star Wars, Marvel and Pixar movies, to classics such as The Little Mermaid and Frozen. It is also the new home of Disney Junior, with shows for little ones including Doc McStuffins, Mickey Mouse Clubhouse and Jake and the Neverland Pirates.

Plus, bear in mind that by subscribing to Disney+ means you’re not just paying for the kids’ entertainment; you can also benefit from the adult TV shows and films shown on Star, Disney’s grown-up arm. Enjoy big hits including Ad Astra, Taken and Borat, alongside dramas such as Big Sky and Love, Victor. And if you want educational viewing for the whole family then National Geographic is packed with shows on everything from the natural world to science experiments.

Netflix and Amazon Prime also offer a range of children’s entertainment when you sign up to either of these streaming services. Plus, as with Disney+, you can create separate logins so there’s no chance of your little ones stumbling on something scary or inappropriate. Apple TV+ also offers lots for children, with fun favourites such as Snoopy and Fraggle Rock alongside loosely educational programmes such as Helpsters and Doug Unplugs, and child-friendly documentaries including Greatness Code and Tiny World.

How much does Sky Kids cost?

When purchased as a bolt-on to Sky TV, it costs £6 a month on a rolling 31-day contract.

Can I get Sky Kids without a contract?

Yes, you can buy Sky Kids on a rolling monthly contract either directly with Sky or as part of the NOW TV Entertainment Membership.

Can I watch Sky Kids on my mobile phone?

Yes. Sky Kids comes with its own app, which also includes films (for an extra fee) and games. Alternatively you can watch on the Sky Go app or the NOW TV app.

How do I get the Sky Kids app?

You can download the Sky Kids app either via the Apple Store or Google Play. It is free to download. Once downloaded you will need to sign in with your Sky login.