Our annual broadband pricing research for 2020

This morning, Cable.co.uk released its annual global broadband pricing study looking at the price of broadband in 211 countries. This number varies year on year, with a host of different countries qualifying or failing to qualify year on year – usually if they have any packages or not, sometimes due to warfare or the collapse of a currency. But 211 is the highest number of countries we've thus far managed to gather the data on since we began running this tracker back in 2017.

So why write a blog about it? After all, we have all the info set up and ready to download from our awesome pricing study source page.

Well, because we thought it would be interesting to give you a little peak at what's going on behind the scenes. After all, it's not just numbers we're digging up here. Those numbers tell a story, both about the state of the broadband market in individual countries, and about trends around the globe. Here, then, are a few of those stories – things we picked up on as we went about gathering the data at the end of 2020, but that might be considered a little too specific or off-topic for the broad strokes of the study itself.

One thing that kept cropping up was the appearance of very fast FTTH (full fibre) broadband availability where it hadn't been available the previous year. Sure, out of 200+ countries there is always going to be one or two that's in the process of rolling out speeds of 1Gbps (or in some cases much faster). But it didn't go unnoticed that this year in particular saw more countries offering those sorts of speeds for the first time than any before. 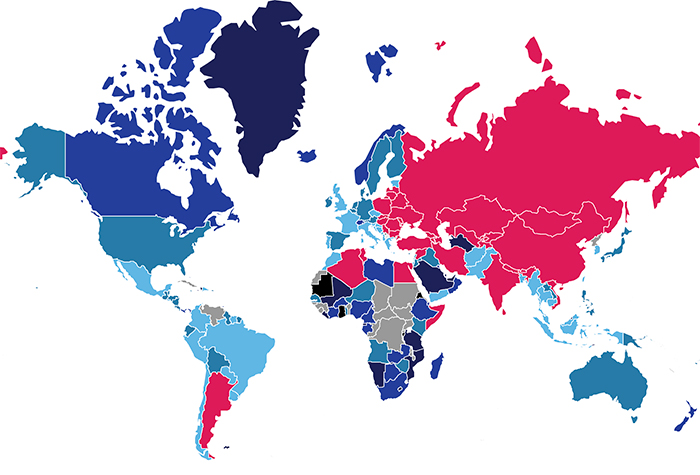 And gigabit broadband isn't just becoming more commonplace in the most obvious places either. Eastern Europe and CIS (former USSR) countries, for example, have for the most part always had great broadband since it became one of life's necessities. Rather, it's appeared this year in some far more unusual and/or remote locations.

Take Réunion for example. This volcanic island some 400 kilometres off the East coast of Madagascar offers its population broadband with speeds of up to 1,000Mbps. Faster than most countries in Western Europe typically offer. Or Peru. Think Peru and you think mountains and jungle, but the reality in its cities is that you can now get some of the fastest broadband in the world.

The worst off remain so

And while that's great news for the couple of dozen countries that have managed to install completely new broadband infrastructure across the last 12 months – or at least make it available to the population in that time – the situation for fixed-line broadband at home continues to stagnate for those on the lower rung.

A great many countries in Sub-Saharan Africa, for example, rely on mobile data as the dominant means of getting online. You can see why. In countries where vast tracts of wilderness separate towns, cities and individual homes, putting cables in the ground is neither the most practical nor the most frugal way to deliver internet connectivity.

Rather, many of these countries (and others like them around the world) offer fixed-line broadband only in a limited capacity. Usually in large towns and cities only, and sometimes only within the financial reach of large businesses or local oligarchs. Just look at poor old Eritrea, where the cost of a fixed line broadband package averages ,666.24 per month.

While such numbers might suggest that no one is able to get online, the reality is that internet access is usually relatively cheap and easy in such places. It's just not by means of fast cables buried in the ground.

So what did our study have to say about the UK? Well, the UK numbers are both good and bad, depending on how you look at them. On the one hand the average package cost of .78 (£25.98 at the time of writing), is relatively cheap compared to the rest of Western Europe. But what are we really getting for our money? Pricing is one thing. Value is another.

If we look at the cost of 1Mbps, for one month (dividing the average monthly cost by the average speed offered) we can compare value across the world. Here is where the UK fares extremely poorly, coming in fifth last from the 29 countries examined in Western Europe. This of course has less to do with pricing than it does to do with the speeds offered – and the UK lags far behind many on that score.

The reason for this is that while gigabit speeds are currently being rolled out to various hotspots around the country, the UK has been a comparatively slow adopter of full fibre (FTTH) technology – one of the few technologies capable of reaching 1Gbps and beyond. Openreach, the UK's most popular and widely available network, hasn't significantly upgraded its speed offering to more than a handful of locations in the last five or more years, while uptake where it is available has been slow.

Meanwhile, countries around the world, including both the home of Machu Pichu and a small island off the coast of Madagascar, are overtaking the UK in terms of both the speeds they offer, and therefore by the value offered.

Currency turmoil in wake of pandemic

Finally, we also saw a tad more monetary turmoil this year. We rely on steady exchange rates in order to convert currencies around the world into a single, comparable one – the US dollar.

But with the pandemic and its economic impacts, the usually tranquil waters of international exchange rates were rather more stormy. It follows, then, that in some case changes in pricing you may see in this year's data may have been as a result of the value of the local currency against the dollar.

Whatever the case, our look at global broadband pricing each year is fascinating both for those of us involved and, we hope, for others to whom we wish the best and hope our research is found to be useful.

Our newsletter is packed full of tips and advice, the latest offers and exclusive deals you won't find anywhere else.