Vodafone Business broadband isn't the fastest out there, and it's unlikely to win many awards for the breadth of features it offers to small businesses. However, it is highly competent and very good value for money.

Those with vast business empires should look elsewhere of course. Like many of its competitors who specialise primarily in residential broadband, Vodafone offers similar propositions, albeit with additional features that lend it a distinct business flavour. Let's take a look.

Vodafone Business broadband likes to keep things nice and simple. Unlike some of its competitors it has skipped completely the low-end 'up to 17Mbps' ADSL packages, offering only two levels of fibre instead. Like its home broadband, these weigh in at 35Mbps and 63Mbps. Such speeds are typical of providers on the Openreach network (that's everyone bar Virgin Media and Hyperoptic).

However, we credit Vodafone Business with a little more honesty than most here. Some time ago, Ofcom ruled residential broadband providers had to state the average received speed rather than the more theoretical 'up to' maximum. This rule did not apply to business broadband and providers have been using that to their advantage to continue advertising those maximums. Not Vodafone, though. Here, you get the average you can expect. Credit where it's due.

Of course there are far faster business broadband solutions out there if you can get them. Virgin Media Business is the most obvious alternative for faster speeds as it is available to around two-thirds of the country. Meanwhile dozens of smaller providers, including Hyperoptic, while less readily available will offer businesses even faster speeds should they both desire and be appropriately situated. 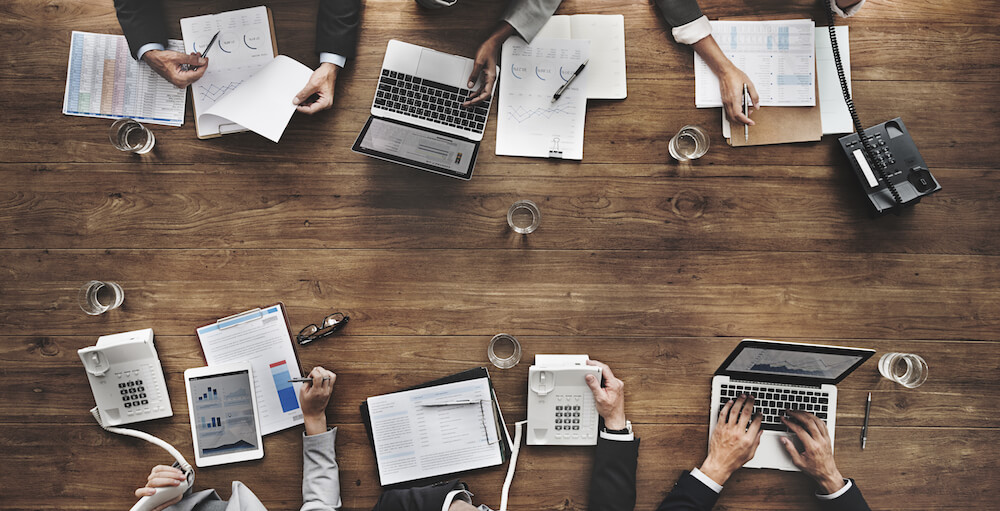 Outside of reliable broadband at decent speeds and a decent price, there's not an awful lot extra to write home about. You will get one static IP address as standard, and a free Smart Router with your package. You can add on Vodafone Secure Net for business for a small monthly fee, which protects against viruses, malware and phishing when you and your employees browse the internet, use apps, download files or use email on your mobile devices. You won't get business cloud storage or business email servers like you do with BT, but then you will be paying a lot less.

What you will get will be access to the Vodafone Broadband app, for easy management of your router/Wi-Fi, as well as quick access to troubleshooting and support. You can even set up a guest Wi-Fi login on the same router, and this will be partitioned from the Wi-Fi used by company employees.

Line rental is included in the overall price you will be paying with Vodafone Business broadband. However, on top of that, you can add on a calling package that most suits your business. These include free evening and weekend calls, free anytime UK calls and something called International 300, with which you can make free or discounted calls to certain countries.

On top of that you can add a whole host of calling and/or support features. Things like Voicemail, ring back when free, business caller display, call management and so on, as well as Support Plus and Premier Support for those businesses where faults on your line could carry dire financial consequences.

Is Vodafone Business broadband fast enough for your needs?

Vodafone won't sell you ADSL with speeds up to 17Mbps downloads and up to 1Mbps uploads, as many other providers still do. And ultimately, while these options may be enough for sole traders, or for small businesses with only one or two employees, they simply aren't fast enough for serious businesses, especially if said business has some digital or online component.

Instead, you can get two levels of fibre broadband – one at 35Mbps and one at 63Mbps. In terms of which is fast enough for you, that is a very difficult question to answer. There are many variables to consider: how many employees the business has, what sort of business it is, how often they use the internet and what employees use the internet for.

Assuming a relatively digital-reliant business such as a graphic design studio, you probably want to get the fastest speed you can. In fact, if you are uploading and downloading large files all day, we probably wouldn't recommend Vodafone at all, and would instead push you to something a lot quicker like Virgin Media.

Other, less techie business types such as bars, florists and hairdressers will no doubt be fine with a lot less. Bear in mind that if you opt for the slower speed and it's not enough, Vodafone will take no issue if you need an instant upgrade.

One final point to bear in mind is that you won't necessarily be able to get the average advertised speed. It actually depends where you're located – how far that is from the nearest green cabinet. If you're too far away you may be stuck with substantially less than the speeds advertised, and by the same token if you're very close, you may end up with more. It can be a bit of a lottery, but fear not – Vodafone will be able to tell you the actual speed you should expect during the sign-up process. You can then decide whether or not to second-guess your chosen speed.

These are decent upload speeds in the grand scheme of things, but if yours is the sort of business that requires online transfer of very large files, you may wish to consider spending a bit more for a bespoke 'symmetrical' solution (identical upload and download speeds) from a more specialised business broadband provider.

Some of this can depend on what you're getting, whether you need a new phone line installed and whether or not you are already a Vodafone residential customer at the address in question. First off you will receive a letter confirming the switch-on/installation date.

On your activation date, you’ll need to plug in your Vodafone Smart Router before 08:00am (remembering to use one of the microfilters supplied – see Step 1 of the Simple setup guide that came in the box with your router). You’ll then find your Business Broadband Service is active by midnight that day.

When your service is activated there will be a constant red light showing at the bottom of your Vodafone Broadband router. All you need to do after that is follow the rest of the steps in the simple setup guide you will receive, and you’ll be online in no time. 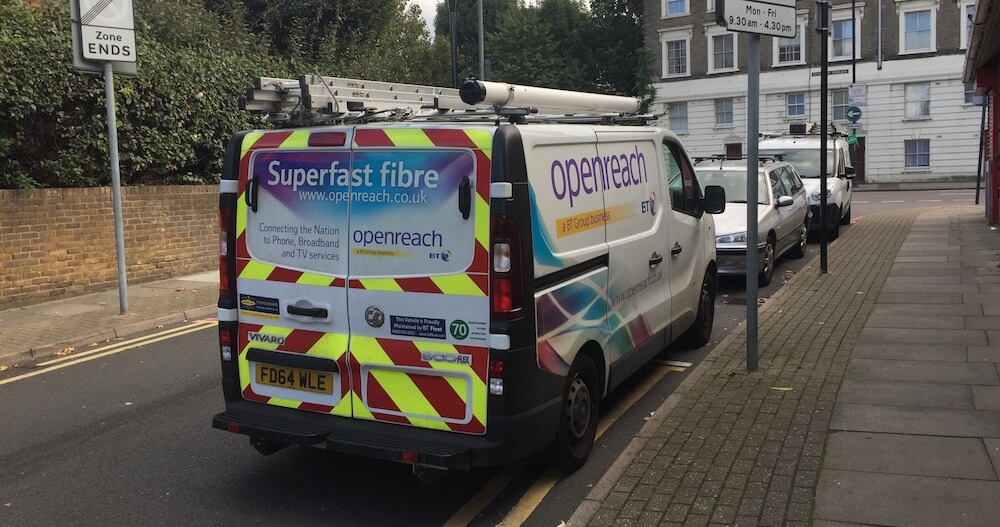 If you already have a Vodafone residential broadband deal and your business broadband is going to replace it, the process will be quicker and simpler.

Unlike some of the competition, Vodafone doesn't feel the need to name its router – it's always referred to simply as the 'Vodafone Broadband router or Vodafone Smart Router' (its proper name, if you must know, is the Huawei HHG2500. Catchy!). Vodafone also doesn't feel the need to offer a different router for its business broadband deals, so residential broadband customers get the same one. The Vodafone router is the Vodafone router.

The Vodafone router is a very capable little box that contains a lot of nice to have features in a small and innocuous enclosure. It's dual-band, which means you will always have at least two Wi-Fi networks available – one for 2.4GHz and one for 5GHz. It also incorporates 'beamforming' technology, which adapts the directionality of its signal to boost performance on devices a long way from the router. In effect, this extends its range.

All in all, you won't get the sort of performance here you'd get from dropping a few hundred pounds on a high-spec commercial router, but it's certainly up there with the best 'free' offerings that arrive alongside most other broadband packages.

There are currently no useful figures showing customer service and satisfaction levels among Vodafone Business broadband customers. Sadly, sources where customers get to write reviews act like magnets for those with an axe to grind and this distorts the true picture beyond all reasonable recognition, with most telecoms providers failing to reach the lofty heights of a 2/10 average. Obviously, this is not a true picture.

According to Ofcom's most recent report on service quality, 90% of the Vodafone broadband customer base were satisfied with Vodafone’s service overall, in line with the industry average of 90%, though this is for residential customers only, and does not include business.

Ultimately, Vodafone Business broadband shares its network with most other providers – you'll need Virgin Media or some more bespoke business service provider to go faster. And it shares its router with its residential broadband offering. If you're a small business, the static IP and possibly some landline add-ons are all that are really on offer over and above Vodafone's (or anyone else's) standard residential packages.

Having said that, Vodafone Business broadband is a comparatively excellent value proposition. It's cheaper than many of the other providers that immediately spring to mind when you think of business broadband, has an excellent router, and decent enough upload speeds that will suit most small business types with up to ten employees.

And at the very least, Vodafone Business is showing more honesty in its average speeds and being far less stealthy about the naked similarities of these small business packages to its residential offerings. All in all, we're quite impressed with Vodafone Business broadband. It's going to be a good choice for those who simply want something cheap and effective.