If you're looking into whether you can get internet through a satellite dish, chances are you're either getting awful speeds from ADSL and/or fibre, and you've already looked into the possibility of getting hold of a mobile broadband router and using 4G or 5G signal instead.

If not, we suggest you do before continuing to investigate satellite broadband as it does come with some significant drawbacks, which we will talk about later on. If an internet satellite dish is your only remaining choice, however, then please do read on. We'll begin by defining exactly what constitutes 'satellite broadband'.

What is Satellite broadband?

Where a standard ADSL or fibre broadband connection arrives at your home through some sort of cable, be that telephone, cable or fibre-optic, and mobile broadband arrives wirelessly via your mobile network, satellite broadband (as its name suggests) delivers internet via satellites orbiting the Earth, allowing you to get internet in remote areas.

Satellite broadband is not to be confused with satellite TV deals from Sky, which also deliver broadband. Sky Broadband uses the same cables as every other provider to deliver its internet packages, and it is only the TV element which is broadcast via satellite. To be 'true' satellite broadband, it must adhere to the following criteria:

Do I need satellite broadband?

Satellite broadband is very niche, and few people opt for it in the grand scheme. There are a number of factors as to why this is, but the number one reason is that most of us can get a decent ADSL or fibre connection that is more capable and costs less. Or failing that a mobile broadband connection to a 4G or 5G network. Here is when you might need satellite broadband and when you probably don't.

When you need satellite broadband

First off, you're going to likely live remotely. Where not only is there either very slow or non-existant ADSL or fibre broadband available, but where also the 4G or 5G mobile network signal is too weak to be a workable solution.

Secondly, you must be in a situation where both traditional ADSL and fibre, and mobile broadband solutions are not a workable alternative. When it comes to practicality, expense and downsides, satellite broadband most definitely comes in third place here. So be sure you've explored all other avenues.

When don't you need satellite broadband

You have exhausted all other possibilities. I.E. you really do live in a cairn on the side of a mountain in the Scottish Highlands where there are no fixed lines and no mobile signal. In this handful of cases, satellite broadband will be your best and only option. 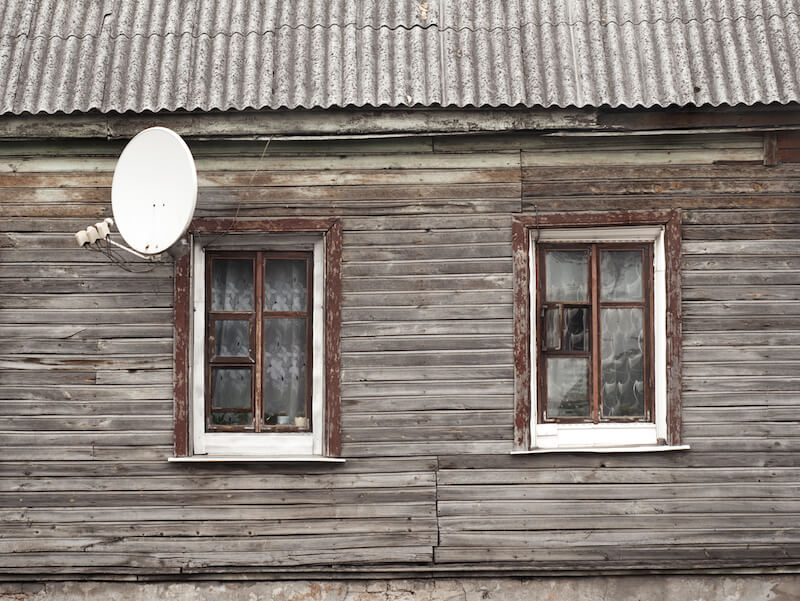 Pros and cons of satellite broadband

There are some positives to talk about with satellite broadband. But you'll note that here, in the following list we're only covering the downsides. Because the upsides are rather obvious and will fit in a sentence: With fast satellite broadband, you'll get up to a 33Mbps, reliable connection for which you can pay monthly, and it matters not whether you live in an isolated barn conversion, farm house, or treehouse.

No matter where you are, you can be connected, provided you're not in the shadow of a mountain cutting off the required portion of the sky from line of sight.

Alternatives to consider before signing up

Before deciding to buy satellite broadband, be sure and check alternative broadband solutions. The expense and other drawbacks of satellite broadband mean it really should be the last resort. That's not a slight on the largely excellent satellite broadband providers out there, by the way. They themselves ask 'Have you checked you can't get 4G?' on their own websites more often than not. More, it's a warning that the technology is inferior at doing what it does compared to a traditional ADSL, fibre or 4G/5G connection.

Here are the other technologies you should be sure you've investigated first.

Apart from the obvious aspect of having to have an engineer come along and fit a satellite dish to your home, the process doesn't differ all that much from how it works when you take out a regular broadband contract. Satellite internet installation costs are high, so be prepared for that.

First, you'll need to get in touch with your chosen satellite broadband provider. They will advise you on the most suitable package to suit your needs. Second, you will have to pay for installation and activation up front in most cases. They will also ask you at this point to set up your monthly payment plan.

Finally, on an agreed day, at an agreed time, installation and connection will take place. Installation time may vary depending on what the engineer has to work with – if there are any particular difficulties associated with your property. By the time the engineer leaves, you will be connected to the internet via satellite. Everything will be done for you and you won't have to worry about how to connect your router to satellite internet.

There are actually quite a large number of permanent and temporary satellite broadband providers for you to consider. They all claim to have the best high speed satellite internet offering, so take your pick.

Is satellite internet a good option?

Yes, but only if there are no other options available. If you cannot get an adequate speed via ADSL or fibre, you should look to 4G or 5G mobile broadband before considering satellite. Satellite broadband is expensive, limited and carries high latency.

Who is the best satellite broadband provider?

Different providers carry different offerings. So when it comes to satellite broadband we recommend shopping around. Prices, data limits and performance can differ dramatically, as not all providers use the same satellite or identical technology.

Can I get broadband through a Sky satellite dish?

No. Though Sky broadband delivers its subscription TV service via a satellite dish, its broadband offering is delivered via a fixed line, just like other providers.

Yes. In almost every way. It's cheaper, faster, more reliable, and carries far lower latency. Satellite broadband should only be considered as a last resort.

Yes and no. Yes, provided there are no other means of getting internet to remote locations. It is the best solution when you have no other options. If there are other options such as fixed-line broadband or mobile broadband, you should choose one of those instead.

How big is a satellite dish?

The sizes vary between providers, but almost all satellite broadband dishes measure less that one metre in diameter.