Many of us place so much importance on being online that it’s hard to know what to do when you’re not connected. Thankfully, the UK has more than one network of wifi hotspots, many of which you can access for free – so you can share your lunch on Instagram, complain on Twitter or just browse the web even if you’ve run out of data.

What is a wifi hotspot?

A wifi hotspot is somewhere you can connect to the internet wirelessly via wifi, often for free. Hotspots are popular with smartphone users as they allow internet access without eating into your data allowance.

Many shops, cafes and public places – such as train stations, airports and hospitals – offer free wifi. This tends to be in exchange for a few personal details or at least an email address.

Free public wifi rarely offers a particularly fast connection – it's unlikely to be as fast as your home broadband deal. It will be enough to check your emails or scroll through Facebook, but you’d probably struggle to stream Spotify or Netflix. Best stick to using your mobile data for that.

If you don’t like the idea of relying on public wifi networks, you can create your own wherever you like – as long as you can get a 4G or 5G signal. There are two ways of doing this. One way is to get yourself a MiFi device, which creates its own little wifi hotspot so you can get your tablet or laptop hooked up wirelessly. The other is to use your phone’s 4G or 5G connection using technology called tethering. Just check whether your mobile provider allows this first, as not all of them do.

Where to find wifi hotspots

Wifi hotspots can be found in public buildings such as libraries, airports, museums and hospitals. Council websites will often have lists of the places in your area where public wifi is available.

If you’re travelling on the Tube, you can get Virgin Media wifi at 260 London Underground stations (ticket halls, corridors and platforms), but not in the tunnels. You can also access wifi courtesy of The Cloud at 79 London Overground stations. Connection is free for the first 60 minutes and subject to a small fee thereafter. Visit Transport for London's website for more information on this.

It’s always worth checking for free wifi if you’re eating out, especially in chain restaurants as they often have deals in place with wifi providers. The same goes for big highstreet shops. For example O2 provides wifi hotspots at McDonalds, while The Cloud offers free wifi in Pret a Manger.

How to connect to wifi hotspots

BT has the UK’s largest wifi network, with more than five million hotspots around the country. Hotspots can be found in airport lounges and terminals including Etihad Airways, American Airways and FlyBe, at Welcome Break motorway service stations, Manchester’s Arndale shopping centre and at Starbucks coffee shops.

And that’s not all. BT utilises the routers used by BT broadband customers to create millions of wifi hotspots, securely sharing a portion of the bandwidth of each router through a separate channel on the BT Hub. This allows others to get online when your router is switched on.

The BT Wi-Fi app will allow you to save your login details and connect automatically when you’re in range of a hotspot.

O2 has more than 16,000 wifi hotspots around the UK and the good news is they are free to access whether you’re an O2 customer or not. If you are an O2 customer, your phone will connect automatically to a hotspot if the signal is stronger than the 3G or 4G in that area. Everyone else will just need to register after connecting manually through your phone’s settings.

O2 has a number of tie-ins with highstreet stores and chain restaurants. You can find O2 wifi hotspots in Subway, Argos, Costa Coffee, Toni&Guy, Café Rouge, All Bar One, William Hill, Strada, McDonald’s and Pizza Hut, as well as in O2 shops, O2 Academy music venues around the country, and The O2 in London.

Virgin also provides wifi at more than 260 London Underground stations and London’s Victoria Coach Station. These hotspots cover ticket halls, walkways, corridors and platforms but not the Tube tunnels themselves. This service is free to Virgin, EE, Vodafone, O2 and Three customers. If you’re with another provider, you can buy a wifi pass from Virgin Media. To get access, simply download the Virgin Media Connect app.

You can also connect to Virgin Media wifi at 32 UK airports, including Stansted, Manchester, Liverpool John Lennon and Glasgow International.

Sky's wifi offering is called The Cloud and it is available in more than 20,000 locations in the UK. You will have to register with Sky's wifi to use these hotspots. Some locations charge for access, but the majority are free. Where payment is required, you’ll be able to pay using your credit card via PayPal or pay directly with your PayPal account.

The Cloud provides wifi to pubs, university campuses and sports clubs up and down the country, as well as highstreet shops, bars and restaurants. 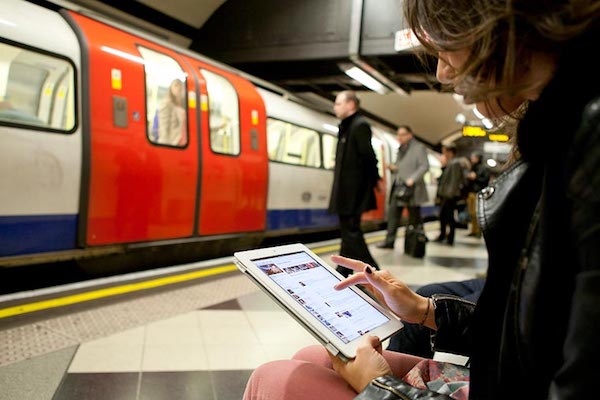 Watch out for usage limitations

When you connect to wifi you’re likely to be sharing that connection with a number of other users, which is why providers often place limits on what you can actually do while using their wifi.

BT Wi-Fi says you may be disconnected from the service if your usage exceeds more than 10,000 minutes in a month. You’d then have to re-login every 30 minutes until the start of the next month. O2 has a download limit of 10GB a month on its wifi service.

Wifi providers may take the opportunity to market things to you – you are using their service, after all. For example Sky, which owns The Cloud, says in its terms and conditions that you may be shown ads for other Sky products such as Sky Sports.

Most of them are free, but some providers or venues do charge. All O2 wifi hotspots are free, as are Virgin Media’s London Underground hotspots if you’re with Virgin Mobile, EE, O2, Three or Vodafone.

How much do wifi hotspots cost to use?

With other providers, it will generally depend on where you are accessing wifi – the price will often be set by the venue.

Public wifi hotspots are unsecured connections. This means it’s possible that hackers will use these shared networks to access personal information such as passwords and even bank details.

The best advice is to be careful when using wifi hotspots. Make use of your device’s built-in security features like firewalls, consider installing a password protection app such as LastPass and simply avoid doing things like online banking or shopping while connected to public wifi.

What can I use wifi hotspots for?

Well, anything you like really. Most wifi connections will easily be good enough to browse the web, use social media and send and receive emails, while O2 actively encourages you to watch YouTube videos, an activity which uses up quite a bit more bandwidth. Pay attention when logging into a hotspot as the provider may warn against certain types of online activity, such as streaming, which uses a lot of data and will slow things down for other customers.

Does Vodafone have wifi hotspots?

Vodafone broadband doesn’t operate any wifi hotspots itself in the UK, but its customers can take advantage of the hotspots installed in London Underground stations by Virgin Media.

Does Three have wifi hotspots?

Does EE have wifi hotspots?

EE doesn’t have any of its own wifi hotspots. In the past, some EE contracts have included the use of BT wifi hotspots, so some customers may find they still have free access. The EE wifi app is no longer available to download, but if you already have it, then you can still use it to get online. A monthly data limit of 3GB applies.

Does Tesco Mobile have wifi hotspots?

No, Tesco Mobile doesn’t operate a network of wifi hotspots. Tesco Mobile runs on the O2 network, and O2 hotspots are free for everyone to use.