Vodafone offers a range of contract, SIM-only and pay-as-you-go tariffs as well as a number of smart devices. There are also neat extras such as free NOW TV subscriptions and rewards each time you top up on pay-as-you-go.

As well as putting a lot of effort into its range of tariffs and handsets, it is pretty big on marketing and has used the likes of Idris Elba as a voiceover for adverts and Yoda to front campaigns. So as Yoda would say: To offer, what does Vodafone have, hmmmmmm?

All Vodafone’s pay monthly contracts last 24 months, but there is plenty of choice on offer. Choose from three tariffs: the basic Essentials which offers low data deals, the snazzier Red Extra with middle of the range data and the glitzy Red Entertainment that offers larger allowances. Within each of these the price varies depending on the amount of data you want.

Vodafone’s SIM-only deals arrive in the form of 12-month or 30-day contracts and all include unlimited texts and a range of data deals. If you're prepared to sign up to a 12-month SIM-only deal, you get more choice and larger allowances of data, texts and calls. You can also get the Red Entertainment tariff on SIM-only, giving you a choice of NOW TV, Sky Sports Mobile TV and NOW TV as an extra.

The SIM-only deals also include global roaming, plus Vodafone will let those on 12-month deals apply for a free upgrade to a monthly contract plan after three months. You can find out if you’re eligible for an upgrade in the My Vodafone app, or by logging into your My Vodafone account.

Contract and SIM-only users can purchase Vodafone data passes for video, music apps or social media chat – or a combination of all three – to boost their basic data allowance.

Vodafone also offers pay-as-you-go bundles that roll over unused data, minutes and texts to the next 30-day period, and gives you reward points each time you top up. The points can be spent on items such as bluetooth speakers, shopping vouchers or even a shiny new smartphone.

Vodafone also offers a pretty unique tariff that caps charges at £1 a day at 20p per 5MB of data, 20p a minute for calls and 20p per text, but any extra use after that is on the house. This gives you unlimited texts, unlimited minutes and up to 500MB of data once your £1 is spent.

Vodafone offers a strong choice of brands including Apple, Samsung, Huawei, Blackberry, Motorola and its own Smart V8 handset. Some networks offer a limited range of each brand, but Vodafone doesn’t just offer the latest handsets – it also offers older models that cost less. 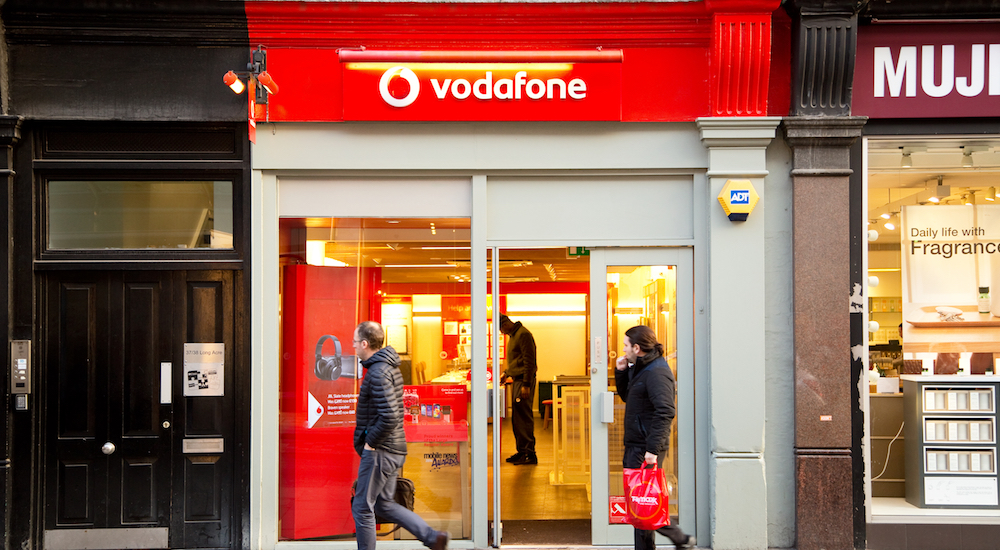 There are a couple of brands missing from its range, such as LG and the OnePlus phone (which is exclusive to 02) but there is still an excellent range to choose from.

Vodafone may offer lots of choice of tariffs and handsets, but it falls down the pecking order when it comes to customer service. The latest Ofcom data shows it had the most complaints per 100,000 customers, with 92, and that 46% were unhappy at how issues were handled – the worst rating of all the providers included in the survey.

Satisfaction levels are lowest at Vodafone at 89%, compared with 92% in the sector. The proportion of Vodafone customers with a reason to complain was higher than the average for mobile customers overall at 7% against 4% across the sector. The majority of complaints – 53% – related to billing issues.

There are plenty of ways to get in touch with Vodafone if you do have issues. You can visit any one of its branches across the UK, use live chat online, or post your query on a customer forum. Its phone lines are also open between 8am and 9pm Monday to Sunday, where Ofcom data shows you will find waiting times of 1 minute and 4 seconds. This isn’t the worst waiting time and is just above the average of one minute in the sector.

If you aren’t happy with the service, Vodafone does offer a network satisfaction guarantee for those who have just signed up or upgraded. As a new or upgrading customer, you have 30 days to put the network to the test. If you’re not happy, Vodafone will cancel your contract so you can walk away – no questions asked. To thank you for your feedback, Vodafone will give you a 250MB data bonus on top of your monthly allowance. This will last for seven days and will be used before the rest of your monthly data allowance.

Vodafone may not be the cheapest network on the market, but you do get lots of good extras, especially with the Red Entertainment plans that come with a free subscription to Spotify, Sky Sports Mobile TV or NOW TV.

There are also options to trade in your old handset from any network, which can reduce your upfront costs, while pay-as-you-go users get added value from rewards each time they top up.

Vodafone also goes beyond the smartphone, by offering a range of smart devices and trackers, such as V Auto which lets you find where your car is parked and monitor how safely you drive.

If all else fails, there is always the network satisfaction guarantee that lets you leave in the first 30 days in you aren’t happy, making Vodafone a failsafe option for any mobile customer.

4G is the name of the game when it comes to mobile coverage. Vodafone has decent 2G and 3G coverage but is still in the process of building its 4G network.

If you are in a major UK city, you are more likely to get a decent 4G signal with Vodafone. Ofcom datashows that 86% of Vodafone users are happy with their mobile reception, which is level with average of 86% in the sector. If you want to be sure it is worth consulting Vodafone’s coverage checker, which will reveal how good its basic 2G, internet ready 3G and ultimate 4G signal is based on your postcode both indoors and outdoors.

Vodafone offers a decent variety of deals for contract, pay as you go and SIM-only fans. Its one limit is the lack of unlimited data but pay as you go users at least benefit from being able to rollover whatever they don’t use each month.

If you are willing to pay a bit extra on a contract you can get nice perks such as a Spotify, Sky Sports Mobile or NOW TV subscription and pay as you go users even get rewards for topping up.

The pricing overall isn’t the cheapest, but you can also earn yourself a bit of money back by trading in your old handset when setting up a Vodafone deal.

The network is doing its best to tackle customer service issues by offering a satisfaction guarantee that lets you leave in the first 30 days if you aren’t happy. It will even give you extra data just for providing feedback.

Industry data suggests you get good mobile signal with Vodafone, so if the customer service issues can be ironed out, this network is worth considering, even if it is just for the first 30 days.