What are eSIMs and how do they work?

The eSIM is the latest incarnation of the SIM card. Having started as a credit-card sized piece of plastic with a chip in, SIMs now are slowly becoming integrated into new handsets. Although the mini, micro and nano SIMs are heading towards extinction, for the time being, most new handsets offer dual SIM capability, with one traditional SIM and eSIM functionality. There are, as yet, no handsets that only have eSIM technology. 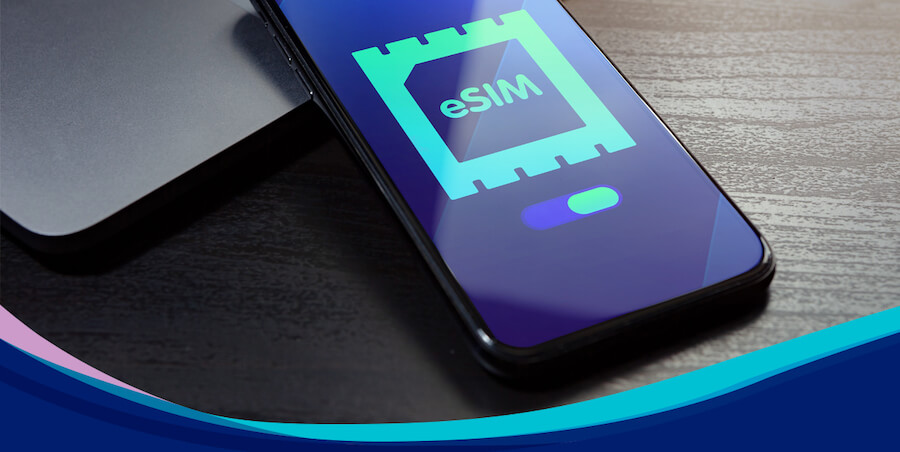 The eSIM appears to have plenty of advantages so far and few disadvantages, but what exactly is an eSIM, how does it work, and is it a good thing to have one? In this guide we look at the details of this latest march forward in technology and tell you all you need to know about eSIMs.

In this guide...
What is an eSIM? How do eSIMs work?
eSIMs vs SIM cards Is your phone eSIM enabled?
FAQs

What is an eSIM?

Most people are very familiar with the concept of a SIM card. This small piece of plastic known as a Subscriber Identity Module (to give it its full name) contains a tiny chip that enables you to connect to your mobile provider’s network. Technology marches on, however, and now there is a new concept for us to get our heads around, namely, the eSIM.

We have become accustomed to new words prefixed with ‘e’ - think e-mail, e-book, e-commerce. In all these cases, the ‘e’ stands for electronic, meaning anything that uses data sent over the internet. However, an eSIM stands for an Embedded Subscriber Identity Module, which basically means the technology that enables you to connect to the internet is already built into your phone as part of the manufacturing process.

How do eSIMs work?

An eSIM enables you to connect to the mobile network of your choice, just like an ordinary SIM, but with a few differences. Instead of having to manually insert a SIM card, you will be given a QR code from your chosen provider that you simply scan to then activate your chosen SIM.

In all other respects, an eSIM works exactly the same as a traditional SIM – it allows you to connect to the internet via your chosen provider’s signal. eSIMs come on a range of contract lengths and with a selection of data allowances – once you have set up your eSIM profile with your provider, you will be able to browse and then activate your chosen plan. The monthly cost will then be debited from your account in just the same way as a SIM-only plan.

So what are the differences between an eSIM and a traditional SIM? There are a number of advantages of having an eSIM, but it may not be worth it for everyone. Plus, because you can currently only have an eSIM as well as a traditional SIM for the time being, you will be taking on an extra monthly cost if you choose to buy one.

At some point soon in the future, it is likely that all SIMs will be eSIMs, at which point their appeal will broaden. However, let’s take a look at the pros and cons of eSIMs as things stand now.

Advantages of an eSIM

It takes up less space than a traditional SIM slot. Because the eSIM is built into the handset at the point of manufacture, the space can be used for other purposes by the phone designers, such as for a larger battery or more memory storage space.

This option to build in a SIM to a device is what has enabled the wearable tech market to expand. The latest generation of Apple Watches no longer need to be connected to your phone in order to work, which gives you the freedom to make and receive calls, send messages and even ask Siri questions without the need for your handset to weigh down your pocket wherever you go.

You can have more than one plan

Unlike traditional SIMs, which tie you to a single provider, eSIMs allow you to have more than one number, and use more than one provider. Most recent handsets, such as those from Apple and Samsung, offer dual SIM functionality with both an eSIM and a traditional nano SIM, so you could choose to have your traditional SIM plan with Vodafone and your eSIM with EE, for example.

You can choose to set up a default number to use for making calls and sending texts, and then add a second and even a third number on an eSIM. In fact, up to 20 eSIM plans can be added in some handsets, although we cannot imagine a situation where anyone would need to do that.

Having a second line on an eSIM can be useful if you want both a personal number and a business number, for example. Or you want to have a number that you can use when shopping online or for giving out to businesses that is distinct from your personal number.

Another situation where having an additional eSIM plan would be extremely useful is if you frequently travel abroad; you can simply add a local eSIM plan to your handset and use that to avoid roaming fees when you are away, and then switch back to your UK SIM when you come home.

Disadvantages of an eSIM

Unfortunately, if you have a mobile plan on an eSIM and you want to switch to a new provider, you will still have to request a PAC code from your current provider. Although it is easy to set up a second or third eSIM plan with a different provider, if you only want to use one eSIM with one number at a time, you will have to request a PAC code if you want to switch and keep your number.

Cannot be removed from the phone

A physical SIM can easily be removed from your phone if required. If your phone breaks or you just want to get a new one, you can simply put your old SIM into the new handset and carry on using the same plan and the same number. Things are a little more complicated with an eSIM. All the information, including your number, is held on the cloud and will need to be downloaded onto your new handset, which can take time.

You still have to pay for a second plan

Ultimately, although the idea of a second line sounds appealing, remember you will still have to pay for it, so unless you really need a second line on your phone, it probably isn’t really worth it, unless you have a specific purpose in mind, such as for business or regular travel. At the moment, there are no phones that offer eSIM-only connectivity, so the only way to have an eSIM plan is to have it in addition to your traditional SIM plan.

How to find out if your phone has an eSIM

The majority of the latest phone models from major manufacturers including Apple, Samsung, Huawei, Google and Oppo have an eSIM built in. It depends on which brand you have as to how you check whether it has an eSIM.

For Apple phones, go to Settings and then About where you will find your phone’s IMEI number. If the phone supports eSIM, there will be two IMEI numbers listed - one for a Physical SIM and one for a Digital SIM.

If you have an Android phone, such as a Samsung Galaxy, in most cases you can simply dial *#06# and your IMEI information should appear. If it is eSIM enabled, you will see more than one IMEI number listed. Alternatively, you can go into Settings and search for the IMEI. Click on IMEI Information and it will show “IMEI (eSIM)” if it has an eSIM. Finally you can try going into Settings, then About Phone (or About Device), Status and then IMEI Information. You will immediately see whether it has an eSIM as it will list “IMEI (eSIM)”.

How to activate an eSIM

It’s worth knowing that even if your phone is eSIM-ready, not all mobile providers offer eSIM deals yet. At the time of writing, EE, Vodafone and O2 all offer eSIM deals. In order to get an eSIM plan, you will need to get in touch with customer services or go into a store and request an eSIM pack, which will contain a QR code that you will need to scan with your phone in order to download your eSIM profile. Once you have your profile set-up, you can buy and activate an eSIM plan.

Do I get another phone number with an eSIM?

Can I get an eSIM contract-free?

Yes, the eSIM plans are identical to the traditional plans offered by each provider, so if your chosen provider offers a traditional one-month SIM-only deal, you will also be able to buy it as an eSIM.

How much does an eSIM cost?

This will depend on how much you choose to pay and how much data you want. Remember that if you choose to have an eSIM as well as a traditional SIM in your phone, you will have to pay for both plans at the same time for the duration of the contracts.

How do I know which SIM I am using?