Fancy bringing a bit of Bollywood into your front room? You can now access a range of Asian channels to spice up your TV viewing.

Only two providers offer Asian TV channels in the UK: Sky and Virgin Media. Sky TV offers the broadest range of Indian TV channels, and best of all, they are free and automatically included in Sky's base pack, Sky Signature.

Virgin offers a slightly more limited range of channels and you will need to pay extra on top of your existing package before you can watch them. Here are the two package options to have you singing and dancing around the living room.

Sky has the most Indian and Asian channels

Sky TV has the broadest range of Asian channels, and since August 2017 these come free in its television packages. Sky offers 19 channels. That means you can sing along to Bollywood songs on B4U Music, watch tear-jerking dramas on Rishtey TV, and follow the feuds and love triangles in the soaps on its range of Utsav channels. 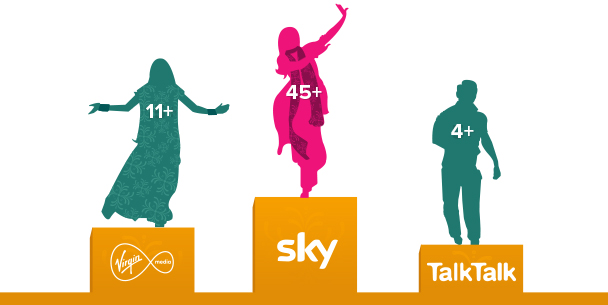 You can catch comedy, drama or reality shows such as Dance India Dance on family channel Zee TV channel comedy or drama shows on family channel Zee TV or the best of Bollywood from Zee Cinema, which also features WWE matches in Hindi. There is also a Zee channel for the Punjabi-speaking community. You will also find Hindi language crime and horror shows and top Hindi reality shows and soaps on Sony Entertainment Television.

There is more to entertainment in Asia than just Bollywood. An Asian TV package wouldn’t be complete without sports. Twenty20 cricket fans can watch the much-loved Indian Premier League on Sky Sports. You need to pay extra to access these channels on a Sky Entertainment package or you could use a NOW TV membership for temporary use over a weekend or on a monthly basis.

Virgin Media customers don’t get automatic free access to Asian channels. If you want to watch channels such as Zee TV or Star, you will need to add the channels on to your existing package. New customers can choose any Virgin TV bundle, to which you can then bolt on the Asian Mela pack that comes with 15 channels including Star Gold, Zee TV and Colors Rishtey for £12 a month. There is no longer the option to add individual channels with Virgin Media.

As a bonus, customers signing up to the Asian Mela bundle add-on will also receive 500 minutes of free calls each month to landline numbers in India, Pakistan and Bangladesh.

The best of the Asian TV packages

If you want to watch Asian television then you need to ensure you are getting the best channels. These are the main channels and some of the top shows you don’t want to miss.

Zee TV was the first Hindi-language cable channel in India. It has been around since 1992. It is pitched as a family and entertainment orientated channel and has broadcast shows such as India’s Best Cinestars, which gave aspiring actors the chance to win the lead role in a film. It also has flagship shows such as crime drama Detective Didi.

Zee also broadcasts the latest drama series Anupamaa, as well as the popular Indian soap, Kundali Bhagya, which follows the story of two sisters Pragya and Preet and their attempts to reunite with their mother. It also has its own movie channel called Zee Cinema, showing the best Hindi movies.

You don’t just have to rely on Zee TV for entertainment now that other global companies have cottoned on to the popularity of entertainment in the region. Zee also owns &TV, which broadcasts a range of soaps and dramas.

Fans of romantic dramas will enjoy immersing themselves in the struggles of Ahaan and Ishqi in Ishk Par Zor Nahi. You will even get to watch popular stand-up comedy programme The Kapil Sharma Show. SET also has a range of sister channels offering sport and cinema and music.

Rupert Murdoch’s media company 21st Century Fox also has a presence with Star TV. It offers a range of channels such as entertainment on Star Plus, which features primetime soaps and India’s take of Britain’s Got Talent with India’s Next Superstars.

Star TV also features India’s longest-running soap, Yeh Rishta Kya Kehlata Hai, which has been going since 2009 – quite an achievement given that Indian serials are regularly canned. The show charts the lives of young married couple Akshara and Naitik Singhania as they manage their children and extended families.

You can also get films on Star Gold and football, cricket and other sports on Star Sports.

Fans of more classic soaps and dramas from India can also watch Colors Rishtey, which broadcasts reruns of older content and dramas that in some cases are no longer being made or broadcast.

As well as drama, soaps and reality TV, you can also dance along to the latest tunes or find out celebrity gossip on B4U Music. This channel shows the latest Bhangra, Bollywood and Indipop music videos as well as the top charts and features celebrity interviews.