Virgin Media’s TV 360 box is the latest set-top box to be released by the broadband and TV provider. Much like its predecessor – the V6 box – it allows you to watch TV in several rooms as well as on the TV Go app, record your favourite shows, and catch up on anything you’ve missed. 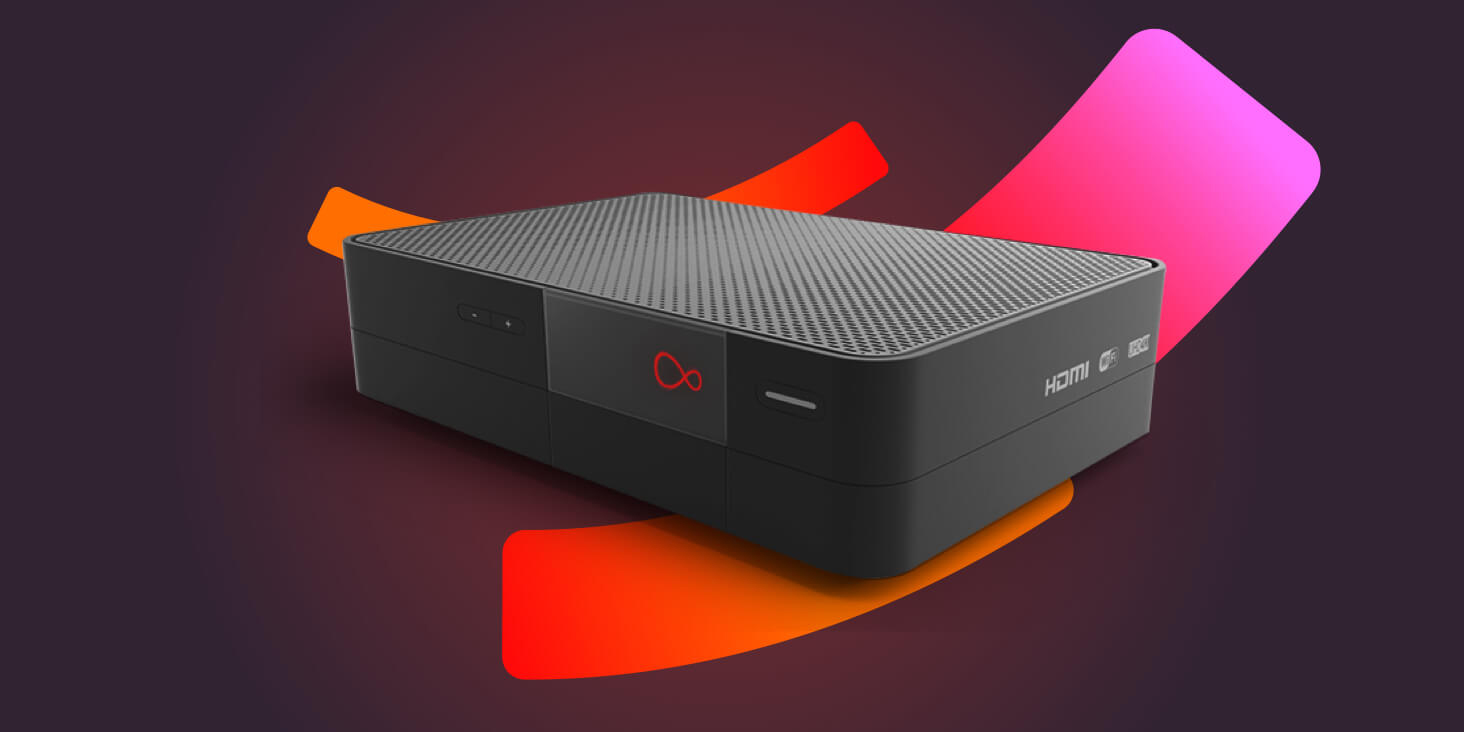 We’ve taken a good look at the TV 360 box and its new features – including the new voice activated remote control – as well as how it compares to the V6 box and, most importantly, how it measures up against rival Sky Q.

In this guide...
Overview Features
How to get it How it compares
What we think FAQs

Virgin Media TV 360 is the latest set-top box offered to customers wanting a TV service from Virgin Media. It provides access to hundreds of free-to-air and subscription channels, as well as a range of TV streaming apps including BBC iPlayer and Netflix. The multiroom technology allows users to start watching TV in one room and pick up another, and the Virgin Media TV Go app means you can enjoy your subscription when you are away from home as well. 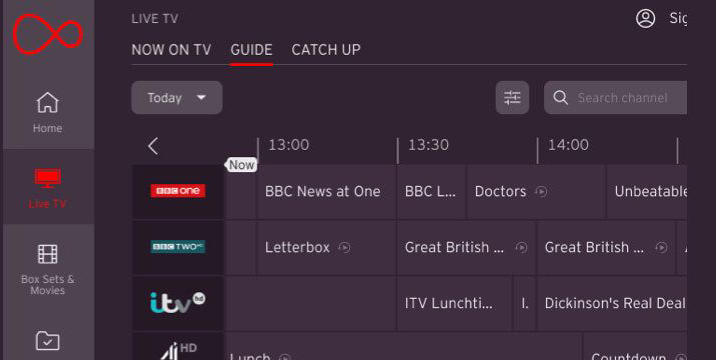 Virgin offers the option to add up to two Virgin TV Mini boxes to your account, giving you the means to watch your TV in three different rooms all at the same time. In addition, customers can download the free Virgin TV Go app and register on up to five different devices, from tablets and laptops to games consoles and desktop computers, although you can only stream on two devices at any one time.

The remote for Virgin Media 360 is equipped with a microphone button, which, when pressed, enables the user to issue voice commands. For example, if you want it to open up Netflix, simply say “Netflix”, or if you want to go to a certain channel, simply speak that channel name. You can also verbally search for specific shows or specific genres, such as police dramas or reality TV. You can also search your recorded shows, request a programme to be recorded, turn subtitles on or off, and even turn the 360 box off.

With so many channels, apps and catch-up services now available, searching for what you want to watch can be a minefield, so Virgin has designed a well-organised, user-friendly TV listings guide that clearly shows all your options. The TV guide also looks the same, regardless of whether you are watching on TV or on your phone, so that you can transition smoothly from one device to the next without getting confused by a different layout. 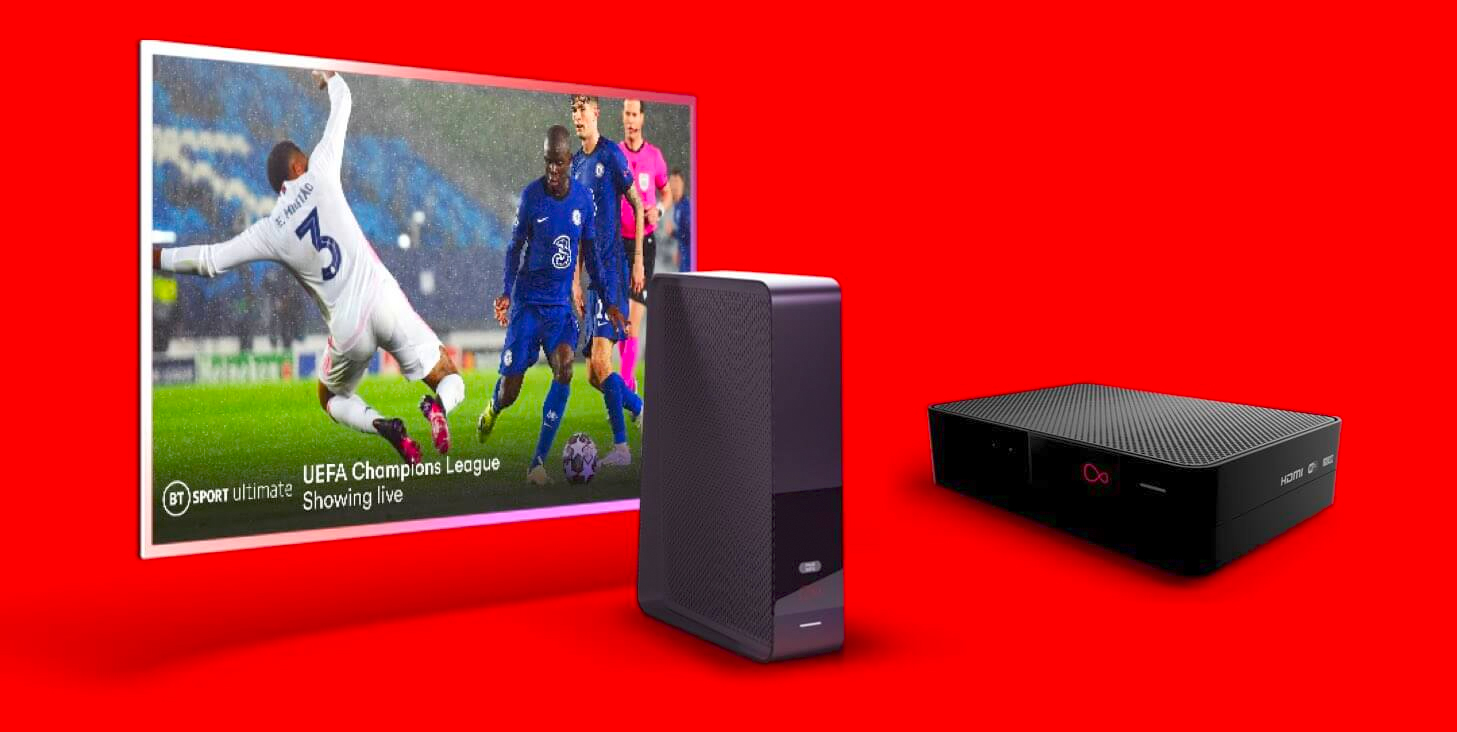 Ever increasing amounts of content – from TV shows to sports and movies – is now being produced in 4K, so all Virgin Media’s TV boxes, including both the main 360 box and the Mini boxes are 4K-ready. Just be aware that in order to enjoy crystal-sharp viewing, you will also need a 4K-ready TV in order to benefit from this feature.

Whereas most TV boxes and streaming apps offer a maximum of four user profiles, Virgin offers a maximum of six, so whoever is watching can just click on their profile and immediately continue to watch their favourite shows. This is very handy for both larger families and any households that share the Virgin TV 360 box.

How to get it

As a new customer

If you are currently with a provider other than Virgin and you want to switch to Virgin Media, you should check first that you can actually get Virgin at your address. To do this you can use our postcode checker which will quickly tell you what your options are.

Virgin’s entry-level TV package is the Big Bundle, which comes with 100Mbps broadband and 100+ TV channels. This gives you access to all the standard TV channels. If you’re looking for a bit more, you can choose the Bigger Bundle, which comes with 190+ channels, including BT Sport, or if you want a lot more, Virgin’s premium package, Ultimate Volt, comes with Sky Sports, Sky Cinema and a free standard Netflix subscription. It also comes with Gig1, Virgin’s top speed, which averages 1130Mbps.

Once you have chosen and ordered your new package, you will need to get in touch with your current provider and let them know that you are moving to Virgin Media.

As an existing customer

If you already have Virgin Media broadband, you can easily choose to bolt on a TV package at any point in your contract. Existing customers will be given a 360 box as standard and can choose to add whichever channels they wish. Just bear in mind that if you do choose to add Virgin Media TV to your existing broadband service, it will kickstart a new 18-month contract for both services.

Existing Virgin Media customers can add TV to their package by logging in to their account, either online or via the Virgin Media app. There is no need to speak to an adviser unless you want to.

How TV 360 compares to Virgin TiVo and V6 boxes

Virgin Media’s TV 360 box is the third generation set-top box offered to customers. Physically, it is much the same in dimensions as the chunky V6 box, and still has a 3.5mm headphone jack, one HDMI output and one Ethernet port. What’s different is the ability to create multiple profiles, to start watching a live TV from the start, a remote control with voice activation and UHD as standard (where available).

Virgin Media’s latest TV box offers a modest technological leap forward from the previous V6 box. Customers can enjoy using an impressive array of voice commands, which was not a feature on the V6. There is the option to set up numerous user profiles, but on the downside any recordings made under each profile are simply lumped together, which could prove frustrating if you want to go straight to your own recordings.

The new TV guide is slick and accessible but there is little else to set the TV 360 box apart from its predecessor. Plus, the fact that several streaming apps are still not available on the TV 360 box will be a big disappointment to many, especially any regular viewer of Disney+.

Both Virgin and Sky offer pretty similar capability when it comes to their TV boxes, including voice control. When it comes to watching in UHD, Virgin has the edge as its 360 box and accompanying Minis are all UHD ready, whereas Sky customers wanting to watch in UHD will have to pay for the upgrade, and the Sky Q mini boxes do not support UHD at all.

However, Sky Q does offer a better selection of streaming apps, including Disney and Apple TV+, both of which are not available through the TV 360 box. NOW TV is understandably not available on 360 as it is a direct competitor to Virgin Media.

Yes. In fact, if you want to, you can record from six channels simultaneously while you are watching live TV.

Can you connect a Virgin 360 box wirelessly?

No. Both the main 360 TV box and the Mini boxes require a coaxial cable in order to work, although the mini boxes can connect to your Virgin Media wi-fi Hub wirelessly.

At the time of writing, no, customers cannot watch Disney+ through their Virgin Media TV 360 box. However, it does support Netflix and Amazon Prime.

How much storage does the Virgin 360 box have?

The 360 box has 1TB of storage, which equates to 500 hours of standard definition TV or 100 hours of high definition.