Highstreet stalwart John Lewis might be more famous for its stores, which in 2020 aren't faring so well, but it also provides broadband services to a lot of customers up and down the country. It’s not the cheapest around but it's not the most expensive either. What's it worth to you to choose a brand that you trust?

All three broadband deals come with a phone line with evening and weekend calls to UK landlines. There’s also the option to include anytime or international calls, or calls to UK mobiles. There’s no option to do away with the phone line.

A router is included with each broadband deal and there are no activation charges or usage caps. All three deals come on 12-month contracts, with price increases after 12 months as per the standard unless you're TalkTalk or Virgin Media, who are making a point about fixed pricing guarantees for various amounts of years these days.

For some households, standard, ADSL broadband will be enough. But most will benefit from a faster speed, especially if you stream a lot of TV and/or download videogames from time to time. Also, if there's a fair number of you all getting online at the same time, you're probably going to want to opt for the fastest speed you can get.

John Lewis’ broadband service is provided by Plusnet, which offers slightly cheaper deals for the same speeds. Unlike John Lewis, Plusnet also offers one-month and 18-month contracts. But then again, if you choose Plusnet you're not going to get that glorious John Lewis brand, and that's what John Lewis broadband is about at the end of the day.

John Lewis offers three simple broadband and phone packages with no set-up or activation fees. These include free Bullguard security and a John Lewis email address. Sometimes John Lewis throws in a gift card or free bit of tech to tempt new customers in. These are a few of its current deals. 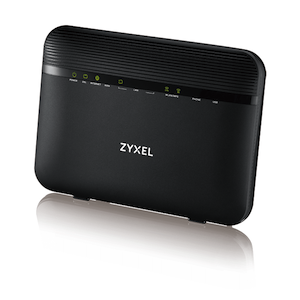 If you sign up to one of John Lewis’ fibre deals you get a better router – the ZyXEL VMG8924. This provides a better signal throughout your home. And it has four gigabit ethernet ports to enable high-speed connections to any wired devices. A firewall, enhanced wireless security, and parental controls are also included. Again, there’s a set-up guide on John Lewis’ website for these.

The website also has tips about how to get the best wi-fi speeds. The ZyXEL VMG8924 is not a bad router, but the tech-savvy will recognise it as not being up there with Sky’s Q Hub or the BT Smart Hub either for range or features.

John Lewis’ broadband packages come free from installation or activation charges. But you will need a normal phone line for the set-up to be fee-free. If you don’t have a phone line, John Lewis can install one for you for a price.

If you’re switching, John Lewis will contact your current supplier and arrange everything for you. (Unless you are with Virgin Media, in which case you will have to make direct contact). You shouldn’t need to tell your existing provider to cancel your service. Most providers will automatically cancel your service once the move to your new provider is complete.

The switch should take between 10 and 12 working days.

John Lewis prides itself on its reputation for first-class customer service. There’s plenty of online support for its broadband customers, including Service Status. This provides details of any maintenance work or issues that might affect your service. There’s also a broadband trouble-shooter that can diagnose and fix problems.

John Lewis enjoys strong brand loyalty and has a dedicated customer base. But will that persuade customers to choose it over more established broadband providers?

Its three broadband deals are simple and functional but not the cheapest around. Plus you’re restricted to a 12-month contract and a package including a phone line. John Lewis broadband is provided by Plusnet, which offers slightly cheaper deals and a choice of contract lengths. It all comes down to how important you consider a name to be.