Shell Energy Broadband used to be called First Utility, which made its name in the energy market and like some of its rivals went on to offer broadband. The offer hasn't changed under the new(ish) ownership. Shell Energy Broadband offers decent budget broadband deals across 18-month contracts. Here's what we think.

Shell Energy, formerly First Utility, has a pretty simple broadband offering. Its entry-level product, Fast Broadband, offers an average download speed of 11Mbps. This is ideal for daily browsing and social media, and a decent speed to stream music and the odd TV show or film.

It also offers two fibre speeds: Superfast Fibre at 35Mbps and Superfast Fibre Plus at 63Mbps. Fibre is much faster than standard broadband and can also handle multiple users streaming and downloading from a range of devices.

These are pretty standard speeds and largely reflect what is offered by most broadband providers. The exception is Virgin Media, which offers top speeds of 362Mbps and more. If you're not sure which package to go for, our guide to deciding what broadband speed you need has all the answers. All Shell Energy’s broadband deals are unlimited.

These are pretty decent upload speeds that are on a par with Plusnet, Vodafone and NOW Broadband and are quicker than BT and Virgin Media. Remember though that these speeds are only estimates. When it comes to uploading a few photos, a second or two more won’t make a lot of difference.

Shell Energy Broadband, which used to be called First Utility, sometimes reduces its prices in a bid to tempt new customers. Taking one of these deals will lock you into an 18-month contract, but at least the price won’t be hiked when the 18 months is up. If you're already with Shell Energy for your energy, you might get an extra discount depending on the tariff you’re on. Below are just some of the deals Shell Energy has on at the moment.

Shell Energy Broadband provides a fairly basic router in the form of the Technicolor TG588v2. This is a single band router that will do the job but not much more. But you don't have to use the router you’re given – you can use the one from your old provider or buy your own high-spec one. Still, we would say Shell Energy Broadband's free router scores minus points here. Almost every other provider offers something better. 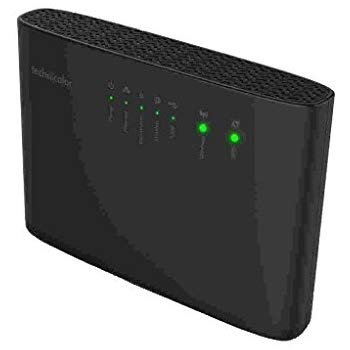 One great thing about Shell Energy broadband, though, is there are no set-up fees – it’s totally free to get going. Unless you don’t have a phone line, then you'll have to pay £60 to have one installed. This is fairly standard. Other providers often charge for a router, installation or delivery – or all three.

When you place an order, Shell Energy will run a check to see if you can get fibre and will let you know what kind of speeds you can expect to get. In reality, the speed you’ll see will be affected by how far you live from the local cabinet, the quality of your internal wiring and even the weather. Note that wi-fi speeds are always slower than wired connections.

Shell Energy Broadband is still something of a new kid on the block in the broadband market. So it's a bit of an unknown quantity.

That’s not the case in the energy sector, where it has a mixed history. Back in 2014/15 First Utility (now Shell Energy) faced a backlash from angry customers fed up with unresolved complaints and call waiting times. At the time First Utility blamed the problems on its own success; it grew so quickly that it didn’t have the resources to cope. However, this is rather ancient history, so take that with a pinch of salt.

Shell Energy’s offering is nice and simple: no set-up costs, average prices, unlimited downloads and no price hikes at the end of a contract. On the downside, there are no fancy extras, no TV option and the router you get is pretty basic.

Energy customers get a discount – but don’t let this sway you. In most cases you’d be better off getting the best energy deal than simply sticking with Shell Energy just to get money off your broadband.

The lack of customer service history may be a concern as you’ll be tied into an 18-month contract. But if you fancy taking your chances for a cheap broadband deal then it may be worth a shot. Those who are concerned with climate change and the environment are strongly advised to look elsewhere. It's Shell for heaven's sake.