Why choose the iPhone SE? 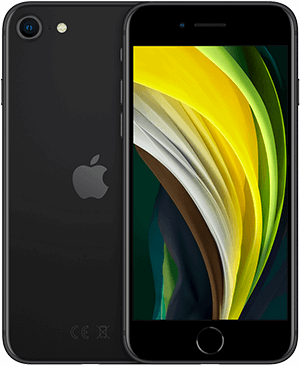 The first generation of the iPhone SE launched back in 2016, the idea behind it to provide an iPhone that doesn't cost the earth for those on a budget. The second generation launched in 2020 and provides many features only previously seen in more expensive iPhones. Let's take a closer look.

Touch ID – a method of unlocking your phone using your own finger or thumb print – was first introduced into the iPhone range on the iPhone 5S, back in 2013. At that time, and for much of the time since, it has been the exclusive realm of the mid to high-end. Since then, though, Apple has introduced its 'Face ID' tech to its top-tier phones, with Touch ID filtering down to entry-level models such as the iPhone SE.

Touch ID is very simple to set up. When you first switch on your phone, it will take you through the process step by step, asking for multiple fingerprints, which it will record using the home button at the base of the handset. Once set up, you will only need to press your chosen finger or thumb against the home button to unlock the phone.

There is a strong case to be made for the iPhone SE being the best 'value' iPhone as well as the cheapest current-generation model. As mentioned previously, many features previously only seen in Apple's mid to high end iPhone models a few years ago have filtered down to the 2020 second-generation iPhone SE.

Such features include a 12MP wide-angle camera with 5x digital zoom, optical image stabilisation and a six-element lens. Up to 4K video recording at 24 frames per second. A 7MP front, or selfie, camera, including a software portrait mode with advanced bokeh and depth control. A 4.7" retina display with a 1400:1 contrast ratio and the ability to put out 625 nits of peak brightness. If you're not familiar with nits, 625 of them is more than enough to use the phone comfortably in strong sunlight.

Then of course you have the features typical to all iPhones. Siri voice assistant, Facetime video calling, built in GPS and compass, 'find my phone' and so on. The SE's compact size and relatively small screen also means it absolutely knocks it out of the park when it comes to battery life, providing up to 13 hours of constant video playback between charges.

In a contest of cost versus features, the SE offers the most bang for your buck of any handset in the iPhone range.

The iPhone SE features a rather small 4.7 inch LCD Multi-Touch display, with a resolution of 1334x750 pixels. While not quite full-HD, the screen's smaller size means that you won't see pixels or jaggedy edges on text and graphics. The screen is also fingerprint resistent, which means it's a little harder to smudge up from touching it a lot than a traditional piece of glass.

This small LCD screen is very bright, and with a high contrast ratio of 1400:1, you won't have any issues reading and using the screen no matter the ambient light conditions. Even bright sunlight is no challenge.

The screen also boasts a wide colour gamut, meaning its representation of colours is natural and convincing. It conforms to the P3 colour standard, which is the same colour standard you find in the Hollywood movie industry.

Another plus point when it comes to having a 4.7" display is that the entire screen is easy to reach when using the iPhone SE one-handed.

The back-facing camera has a 12 megapixel sensor. Of course there are phones out there with much more than that, but you should consider that 12 megapixels is large enough to comfortably blow up onto a poster with a 15-foot diameter. It is one hell of a lot of pixels. It also features a 5x digital zoom, but since the zoom is digital and not optical (using lenses), the more you zoom in the more of that resolution you will lose.

It also offers a host of image-processing features to ensure almost every photo is a winner. Portrait mode offers advanced bokeh and depth control, allowing you to keep the foreground subject in sharp focus while blurring out the background in a very pleasing way, coupled with the ability to adjust the way light is represented in said background. Optical image stabilisation means you won't even need particularly steady hands to take great shots.

There's also autofocus, a panoramic mode providing images consisting of up to 63 megapixels, a sapphire crystal lens cover, next-generation smart HDR, burst mode and more. To reiterate, these are all features previously only found on higher-end handsets with a higher-end price tag.

The second, front-facing camera for selfies and video calls is no slouch either. The 7 megapixel sensor is complimented by most of the same features as the rear-facing camera, but includes a few things designed specifically for selfies such as a retina flash (red-eye and reflection elimination).

A common feature now where once the exclusive territory of the very top end, the iPhone SE comes with integrated wireless charging. You’ll need to purchase a Qi-certified (Qi is pronounced ‘chee’) charging mat to use this facility at home. All you need to do is place the charging mat on a flat surface top and place your iPhone on the mat with the display facing upwards. If you’re out and about and find your handset on the dreaded red line, a number of food and restaurant chains such as McDonalds and Starbucks have started rolling out charging pads across their stores. Swedish furniture giant, Ikea, has a range of home furniture with Qi charging points built into them.

Wireless charging works by using magnetic induction through the glass back on the handset. To get better performance it’s usually recommended to remove any casing during charging. The one drawback, though, is the necessity to leave your handset alone during wireless charging. You can’t pick your phone up and use it, unlike when it is charging through a USB cable, because, obviously, it will stop charging.

One of the most common ways a person can end the life of their phone prematurely is, believe it of not, dropping it in the bath or down the toilet. The iPhone SE is water resistant to a depth of one metre and for up to 30 minutes. A standard known as IEC 60529. That does not mean you will be able to go swimming with your phone, though. More that should you drop it accidentally into water, permanent damage is unlikely.

Dust resistance is another feature of the iPhone SE, and means, in short, it is designed so that dust particles cannot find any easy way inside the housing of the handset. Pretty essential when a lot of us tend to keep our phones inside a lint-laden pocket.

The iPhone SE features an aerospace-grade durable glass design coupled with tough aluminium. Like any phone, a hard corner impact on a concrete floor will likely cause cracks or shattering, however. Our advice is always purchase a protective case or cover when you buy any new phone.