EE and O2 are two of the UK’s main four mobile operators, alongside Three and Vodafone. EE was formed in 2012 by the merger of Orange and T-Mobile, while O2 can trace its roots back to Cellnet and BT Cellnet before it became O2 in 2002.

With that history lesson over, its time to see which of these mobile heavyweights is the right network for you in 2018. This will depend on what matters the most to you. Is it data speed, coverage or reliability? Or perhaps you're more interested in value for money, customer service or what little extras might be on offer? Whatever your priority (pun intended), we've got all the info you need right here.

Both EE and O2 offer pay monthly, pay-as-you-go, SIM-only, tablet and mobile broadband price plans. On a SIM-only basis, the two networks compare favourably on price. When offers are taken out of the equation, O2 tends to be better value at the lower end of the market, while EE offers more data at the upper end.

If you want a handset, then it’s worth noting that with some handsets, such as the latest Samsung Galaxy S9, EE will only let you get one with a high-end price plan. In general, O2 is more flexible on the choice of tariff and also separates the cost of your handset and your airtime. This means that once your minimum term has expired, you stop paying for the phone and only pay for your allowance. Plus, the handset part of the contract isn’t subject to price increases in line with inflation (whereas the airtime part is).

When it comes to pay-as-you-go, both providers offer bundles of calls, texts and data for you to buy with your credit. These packages are relatively similar in terms of cost and allowances, but if you want ‘classic’ pay-as-you-go where you only pay for what you use, then O2 is the clear winner.

Since the summer of 2017, all mobile operators within the European Union have been forbidden from charging additional fees to anyone using their mobile phone in any other member state. Although several mobile operators promoted this as a brand new offer they were introducing voluntarily, any UK operator is now legally required to let you roam without penalty across Europe, and EE and O2 are no exception.

If roaming is the most important criterion between choosing either EE or O2, then it comes down to a choice between speed and cost. EE will let you roam on 125 4G networks in 76 countries around the world, but not all of these are inclusive and will incur standard roaming charges. EE does promise to provide you with usage alerts and data caps, but this could be an expensive way to use your phone.

If you go for a 4GEE Max plan, you’ll get inclusive roaming in Australia, Canada, Mexico, New Zealand and the USA, on top of the standard EE destinations. Other users can pay a fiver for 500MB to use in these countries, as well as in China, India, South Africa, Thailand, Turkey and the UAE.

O2’s inclusive roaming has just been expanded to cover not only the EU, but large swathes of South and Central America, parts of Asia and Africa, Australia, Canada and the US. In other selected areas, you can get an add-on offering unlimited data, send 120 texts and call for 120 minutes in 29 destinations for £4.99 a day. When it comes to roaming, O2 has the advantage, unless you desperately need 4G and (preferably) your employer will foot the bill.

The speed of EE’s 4G network is unparalleled within the UK. As the first UK operator to launch 4G – back in 2012 – it has had a head start on the competition and has continually rolled out upgrades across its network. This includes ‘Double Speed 4G’ LTE ("Long Term Evolution") which is available in urban areas, and LTE-Advanced (marketed as 4G+), which is accessible in certain parts of major cities. EE’s fastest commercial speeds to date are a blistering 429Mbps.

If you opt for an ‘Essential’ Plan with EE, then you are restricted to 60Mbps, whereas if you opt for the more expensive ‘Max’ Plan, you get the fastest possible speeds available in your area and on your device.

O2 offers no such restriction on speed, but it is slower than EE. However when you take into account the fact that EE’s fastest speeds are only available in certain parts of the country, it’s worth checking how each network behaves in your area.

Simply put, EE has the best 4G network of any UK mobile operator. Its basic LTE service is available to 99.6 per cent of the UK population, although it must be noted that double speed 4G is largely limited to urban areas and ‘4G+’ is restricted to certain parts of major cities.

While the initial focus of 4G rollout was on population coverage, EE is now making a big deal about ‘geographic coverage’ in a bid to push home its advantage. Its network is currently available to 90 per cent of the UK landmass and the operator wants to increase this to 95 per cent by the end of the decade.

However O2 has made significant gains. As part of its 800MHz spectrum licence, O2 was required to deliver 4G coverage to 98 per cent of the UK population. Ofcom has confirmed that it achieved this requirement by the end of 2017.

If you want to take advantage of either network, but don’t want to sign up for EE or O2, then you might want to consider one of the ‘virtual operators’ that use the same infrastructure. For example, Virgin Media uses EE and Sky Mobile is on O2.

O2 has traditionally been strong in customer service, and regulator Ofcom’s most recent reports on customer satisfaction and complaints would appear to suggest that this is still the case. Sixty per cent of O2 customers are happy with how their complaint was handled and 93 per cent are happy with the operator overall – both above average. 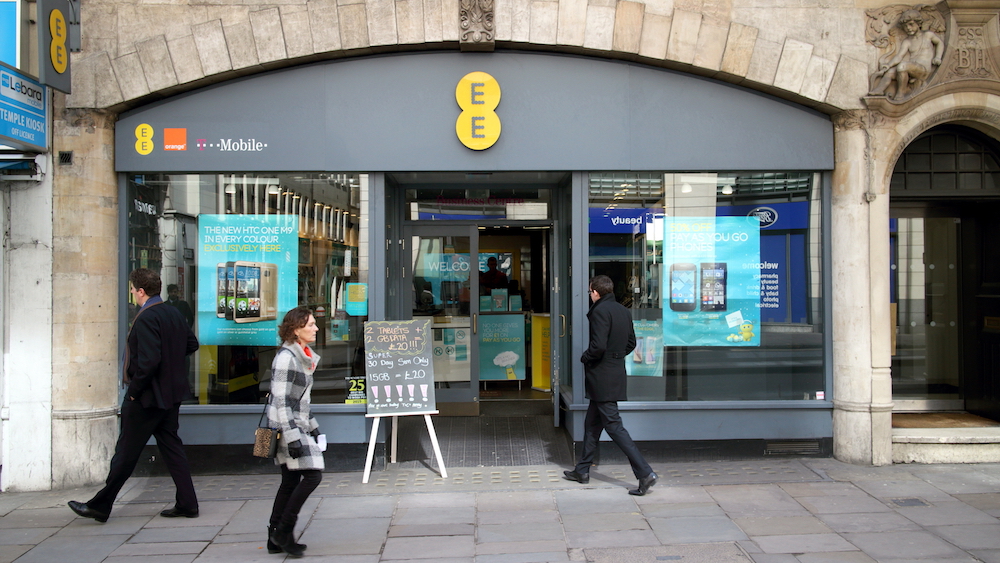 However EE is not far behind. Fifty-seven per cent of customers are happy with complaints handling and 92 per cent are satisfied with their service. Both of these are in line with the industry average.

In terms of total complaints, Ofcom receives three complaints per 100,000 customers about both EE and O2 – below the industry average of five. In this one, it’s a dead heat.

EE and O2 are fairly well matched with regards to added extras, and it comes down to whether you value services or experiences. With EE you get six months of free Apple Music streaming with any deal. You can also get up to two years' inclusive access to the BT Sport app, offering you a selection of live football, rugby and other sporting action.

With O2, you get access to Priority, the UK’s largest digital loyalty programme. O2 will give you treats like free coffee, restaurant discounts and the ability to get gig tickets up to 48 hours before anyone else. Both options are pretty neat, so it really does come down to preference.

As you can see, both operators have their pros and cons, but the choice is actually quite simple. If you want the best network and don’t care how much you spend, then EE is the one for you. It has the fastest speeds and best coverage, while there are some nice extras for you to use your data on. But if you want more for your money and don’t mind slower, if still perfectly good speeds, then it’s worth checking out O2.