BT TV offers a convenient way to bolt a TV service onto a BT broadband package. It is not available as a standalone TV service, but does offer several benefits for anyone happy to sign up to both. But is it actually any good?

BT’s TV offering has its foundation in the Freeview channels. From there, you can add on various extras at each package level, from Kids to Sky Sports and Sky Cinema. For an in-depth review of each BT bundle, visit our guide on BT channels . If you just want to take a quick look, you can use the tool below.

BT Sport – BT Sport is the main draw for many customers considering taking BT TV. With a wealth of football coverage, including Champions League, Premier League, Europa League and FA Cup matches, BT Sport is a must for any football devotee and taking it as part of BT TV is the cheapest way to get it. It comes as standard with Sport (BT’s mid-range TV bundle) and with BT TV Big Sport, or alternatively you can choose to pay extra to bolt it on to the Classic Entertainment or Entertainment bundles.

AMC – All packages come with American drama channel AMC – which is exclusive to BT. So if you are a fan of the likes of The Walking Dead and all its spin-offs, then it's worth signing up.

NOW TV Entertainment – BT now includes a NOW TV Entertainment subscription with most of its TV bundles as standard, but you will need to be able to receive a BT Fibre speed of 32Mbps or more in order to watch the channels included. This is because BT’s Premium channels are all supplied via your internet connection.

BT does not offer its own hardware, unlike Virgin Media or Sky. Instead it supplies customers with a YouView box, the latest version of which is the YouView G4, provided as standard with all flexible BT TV packages. This provides all your chosen channels, along with seven-day catch up and access to TV apps including BBC iPlayer, ITV Hub, Netflix and NOW TV. Customers can also pause, rewind and record up to 300 hours of TV. 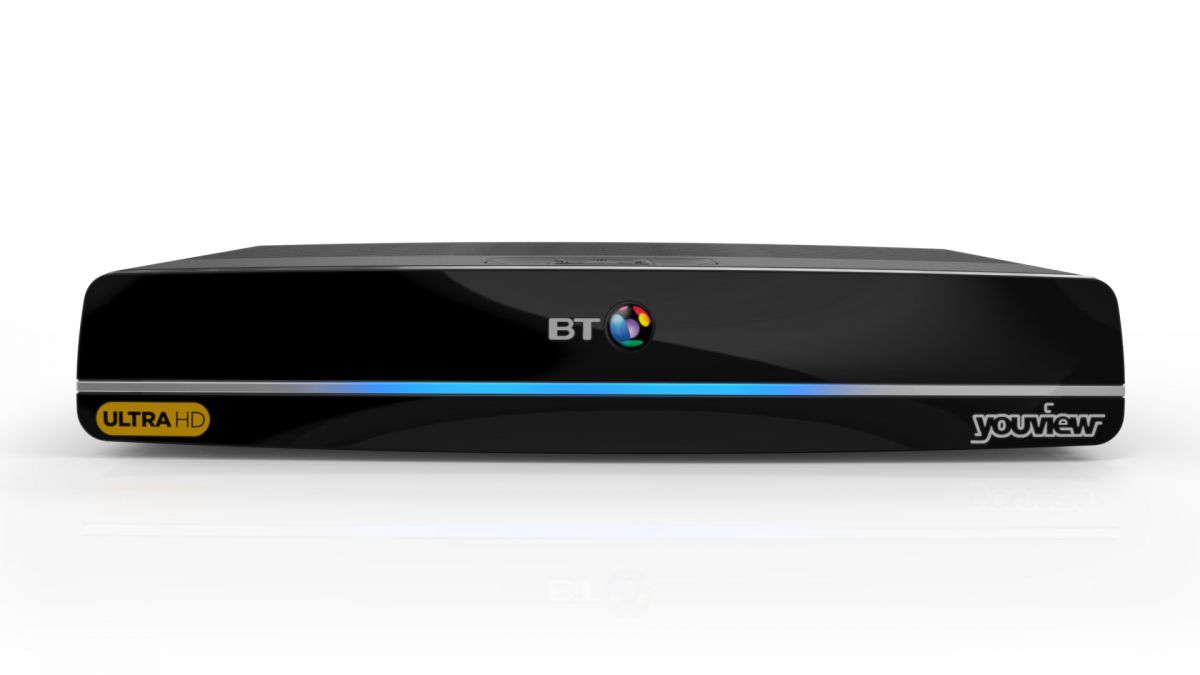 The premium package, BT VIP, comes with the correspondingly premium Ultra HD YouView box, which can hold 600 hours of programmes. (Note that you will need to have a 4K TV and a minimum download speed of 44Mbps in order to benefit from the 4K/UHD programming.) This will enable sports fans to enjoy watching BT Sport Ultimate, the only UHD channel offered by BT TV.

BT considers these independent streaming services as add-ons, meaning you can subscribe and pay for them through BT TV and watch them on the supplied set-top box. We say they don't really qualify as you could have either or both without the need for BT TV.

These are included in some BT TV packages as standard – in the form of NOW TV Cinema and Sport. If they’re not in the package you want, you can choose to add either or both, but just as they are with any Sky package you'd care to choose, they are not cheap. Still, with Sky Cinema, having the option to add a decent movie service fills a hole BT TV is otherwise lacking. Sky Sports, meanwhile, in addition to BT Sport, ensures you never miss a goal, lap, 147 break, you name it. Love of sport is not cheap these days.

If you want to be able to watch your BT TV subscription on TV in a second room, you can subscribe to BT Extra Box. For a fiver you will be supplied with a second YouView G4 box. There is a slight caveat in that in order to watch BT TV content on a second box you will need a minimum download speed of 23Mbps from a BT Infinity connection, so the Extra Box facility is not available to standard/ADSL BT broadband customers.

The BT TV app is free to all BT TV customers. It enables you to watch all your BT channels on your phone, tablet, computer or laptop wherever you are, and also set programmes to record at home while you are away. The BT Sport app works in the same way, enabling you to watch all the BT Sport action on a device of your choice either at home or when you are out.

You can only get BT TV in a bundle with BT broadband. It's not available on its own. There are currently six BT broadband and TV bundles They are:

You can't get BT TV without also signing up to BT Broadband, but if you're already a BT broadband customer you can add BT TV at any time. You can choose to bolt on any BT package, subject to having the minimum broadband speed requirements of 32Mbps for anything other than the Classic Entertainment pack.

If you're an avid sports fan, BT TV could be for you. With BT Sports coverage rivalling that of Sky Sports, it’s worth serious consideration for football fans in particular, especially if you pair it with NOW TV Sport. The entry-level packages are ideal for anyone wanting to get a straightforward TV package – with the Entertainment bundle offering the added bonus of NOW TV Entertainment with Sky Atlantic.

For film fans, the decision is just as easy. NOW TV Cinema is included in several packages as standard. Plus, Netflix and Amazon Prime are also supported by BT YouView, so film fans can subscribe and enjoy the best of all the streaming services.

The VIP package offers everything you could possibly want, includingSky Atlantic. It’s considerably cheaper than the Virgin Media Ultimate Volt Bundle, but then that does come with 1130Mbps broadband. BT TV is no longer just about BT Sport, although that remains the main reason to get it. For everyone else, it ticks a lot of boxes and is well worth consideration.