EE mobile vs Vodafone mobile: Which is best?

EE and Vodafone are two out of three mobile network providers in the UK to offer 4G LTE-Advanced speeds (i.e. super quick), and both have begun rolling out their 5G networks. EE has the highest average 4G speeds with its 4G+, but Vodafone isn’t far behind, and the gap is even smaller when you look at their current average 5G speeds. If you’ve got the need for speed, it’s a toss-up between the two. But which one is best? 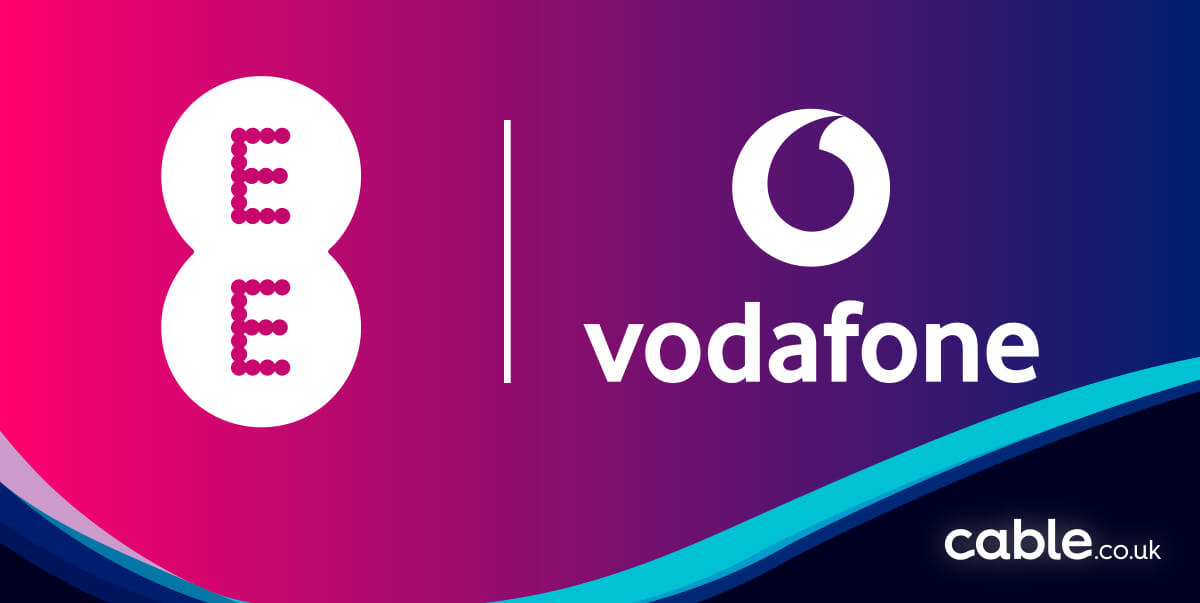 Contrary to popular belief, there aren’t scores of mobile networks in the UK. There are just four: EE, Vodafone, O2 and Three. All the rest “piggyback” off one of these networks, meaning they operate using the same signals but have their own brands and tariffs.

So, EE and Vodafone are two of the biggest networks out there. Both offer superfast 4G, growing 5G coverage, and a wide choice of tariffs, extras, decent data allowances, travel bolt-ons and the latest handsets. However, there are a few differences. Read on to find out what they are.

Both EE and Vodafone offer a wide choice of handsets, bundles and SIM-only options.

Both EE and Vodafone offer a huge choice of pay monthly phone and airtime deals. Vodafone has a slightly lower entry point around £10 a month on some deals, while EE’s cheapest monthly tariffs start at around £15. With both providers, a fancy handset and an all-singing, all-dancing tariff will cost you more than £70 a month.

If you’re after a SIM only deal, prices start at about a tenner a month with both providers, and slightly more if you opt for 30-day, rather than 12-month, or 24-month terms.

EE’s big selling point is its speed and it has come out on top on numerous speed tests and been handed several accolades for “fastest speed”. EE was the first UK network to offer 4G, and its LTE-Advanced offering called 4G+. The plus sign means even faster speeds. EE claims it's the equivalent of getting fibre broadband on your mobile and the network promises download speeds of up to 60Mbps on some of its plans. EE was also the first to launch 5G in the UK, available in more towns and cities than any other network. 5G works in addition to the existing 4G network, instead of replacing it, offering better reliability and connectivity for users of both. All EE plans include 5G, but it will only work with 5G handsets.

Vodafone’s download speeds are pretty swift too. It advertises 4G speeds up to six times faster than its 3G speeds. Vodafone is one of three UK providers, alongside EE and Three, to have a LTE-Advanced service, but only available in certain areas. Vodafone is also rolling out 5G, already available across the UK, and roaming 5G services within a few countries in the European Union. However, speed tests suggest Vodafone doesn't perform as well as EE.

EE is racing ahead when it comes to UK coverage – it beats not just Vodafone, but all the other providers with the best 4G and 5G network of any UK mobile operator. Its basic LTE service is available to more than 99% of the UK population, while double speed 4G is largely limited to urban areas and ‘4G+’ is restricted to certain parts of major cities.

Vodafone has at least 99% UK 4G population coverage across thousands of towns, cities and villages, and has also started rapidly rolling out 5G.

It’s important to remember that if you want EE’s good coverage, you don’t necessarily need to take out a contract with EE. Several other big providers use the EE signal, including BT Mobile, Asda Mobile and Virgin Mobile. It might be worth checking them out.

The same goes for Vodafone. Its network is used by Virgin Mobile and Talkmobile, amongst others.

If you read the results of a Which? survey in April 2021, neither EE or Vodafone are particularly popular with consumers – both came in the bottom half of the rankings. Both EE and Vodafone performed poorly on value for money. This is unsurprising given that 7% of customers received incorrect or unexpectedly high bills – the highest across all the providers.

Overall, the report showed a tendency for smaller providers to provide better customer service, even though they piggyback off the bigger providers’ networks.

In the latest Ofcom report on service quality, Vodafone ranked amongst the worst for customer service, and its customers were significantly more likely to have a reason to complain, compared to the market average. EE customers’ overall satisfaction with complaints handling was consistent with Vodafone’s, but EE was more likely than the mobile average to have resolved a complaint completely on first contact.

Vodafone’s not much better at keeping both its customers and the regulator on its side. In October 2016, it paid out £4.6m as a result of mishandled complaints and mistakes applying pay-as-you-go credit to customers’ accounts.

EE customers can choose up to 3 Smart Benefits, available on Pay Monthly handset, selected SIM and tablet customers on a Smart Plan. Smart Benefits include free Apple Music, the BT Sport Ultimate app, Netflix and more. WiFi Calling means you can make calls, even when there’s no signal.

With Vodafone’s free VeryMe rewards app, customers get ​access to treats, offers and giveaways from popular high-street brands. Entertainment Plans include your choice of YouTube Premium, Spotify Premium and Amazon Prime included in your mobile plan, and there are options to add-on other streaming services like Netflix and discovery+. Like EE, Vodafone also offers free WiFi calling. Vodafone no longer offers free WiFi on the London Underground, but offers 4G services on parts of the Jubilee line.

If you are on a pay-as-you-go plan, you can use the Vodafone Call Back feature. When you’ve run out of credit, Vodafone Call Back texts the person you’re trying to contact, asking them to call you. This service is free, and can be used up to twice a day.

Mobile roaming charges were abolished while the UK was in the European Union, but after Brexit, this is no longer the case.

Most major mobile operators have reintroduced roaming charges, with some scheduled to start in 2022. EE will charge customers a £2 per day roaming fee from 3 March 2022, but only those who took out new contracts or renewed contracts after 6 July 2021 are affected. Vodafone lets you use your data, minutes and texts across 51 European destinations on selected Xtra Airtime Plans and across 83 worldwide destinations on selected Unlimited data Xtra Plans (older Vodafone contracts may have different roaming terms, so best to check your account if you’re an existing customer).

With EE and Vodafone, you might still have to pay if you travel outside the EU or to destinations not included in their roaming tiers. Both networks offer capped data, text and calling add-ons for use while roaming for an additional fee.

If you want fast speeds and almost-perfect coverage, then EE is the standout winner. Its network is simply faster than the rest, and has the best coverage. Speed freaks will find it’s a step ahead of the competition. Vodafone isn’t far behind though, and both providers are generally faster than Three and O2.

Coverage-wise, the best network for you greatly depends on the coverage in your area: there’s no point in EE covering 99% of the country if your house is in the other 1%.

EE offers a plethora of choices when it comes to handsets, pay monthly plans, SIM-only deals and pay-as-you-go options. To EE’s credit, its previously confusing travel bolt-ons have been simplified with a new roaming calculator, making it easy to figure out if you’ll have to pay extra for roaming abroad depending on your contract and your destination.

But where EE lets customers down the most is its website. We’re sure all the info is there but finding what you need is nigh on impossible, and often you need to go digging through their forums to find what you need.

Vodafone’s website is much more user-friendly and it’s easier to find a phone plan to suit your needs. In our opinion it has more comprehensive roaming offers too.

As always, it comes down to what you want from your mobile service. If speed is of the essence, pick EE but you’ll need the patience of a saint to navigate its website. If you travel a lot and don’t need the fastest speed available, Vodafone may be your best bet.