Mobile phone giant Vodafone also offers home broadband to compliment its other services. It has placed itself at the more affordable end of the market by offering a decent, but limited range of broadband packages. Its broadband packages currently comprise two mid-range fast fibre options.

A poor router can slow your broadband down at the last hurdle. Alternatively you may get great broadband speed, but the router’s wifi doesn’t reach every room in your home. Given this, how does Vodafone’s router fare?

How to get a Vodafone router

In most cases, you can expect your Vodafone router to arrive within approximately ten days of signing up to a new package, and you can easily set it up yourself.

Vodafone offers a very straightforward deal when it comes to broadband. You can choose from two mid-level fibre broadband speeds of 33Mbps or 66Mbps. Because of this, Vodafone offers one router for both services, since Vodafone doesn’t offer a 10Mbps ADSL option, there is no need for an entry level ADSL router in its range. All new Vodafone customers will receive its new Vodafone WiFi Hub. 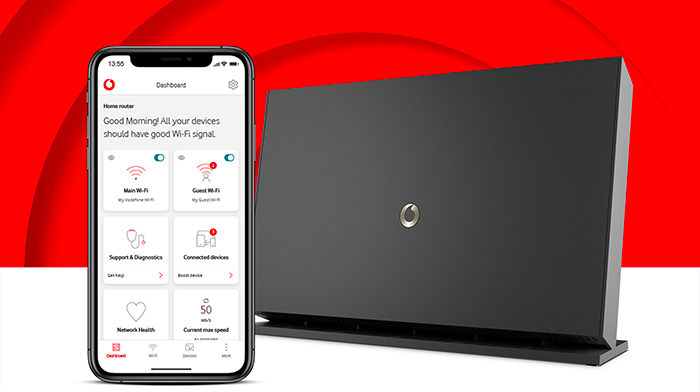 If there are any unfamiliar terms you'd like a more in-depth explanation of, check out our jargon-busting guide.

Setting up a Vodafone router

Setting up your new Vodafone router is an easy process and should only take a few minutes.

You are ready to connect your devices to your new wifi network. Your wifi log-in details are on the back of the router.

Once your router is up and running, we'd suggest you start making it as secure as possible. Our guide to securing your wifi router can help.

The shiny new Vodafone WiFi Hub is not the only Vodafone router out there. Plenty of Vodafone customers are still using its older routers. So let’s take a look at the features provided by them.

Will I be able to keep my Vodafone router if I leave Vodafone?

If you decide to leave Vodafone, your router must be returned, alternatively you can pay a fee if you wish to keep it.

Can I get Vodafone broadband without a phone line?

Vodafone broadband is provided through a telephone line, so a phone line is required. However the line rental is included in the price of your broadband package.

What is the latest Vodafone router?

Vodafone provides all its new broadband customers with a Vodafone WiFi Hub. This is its latest router and the only router it currently offers.

Will I need a new router if I upgrade to fibre broadband from ADSL?

Beamforming is a feature of Vodafone’s WiFi Hub, which allows users to specify a stronger internet connection for a particular device. The router forms a wifi ‘beam’ which follows the device around your home. It is designed to maintain a good wifi connection for that device.